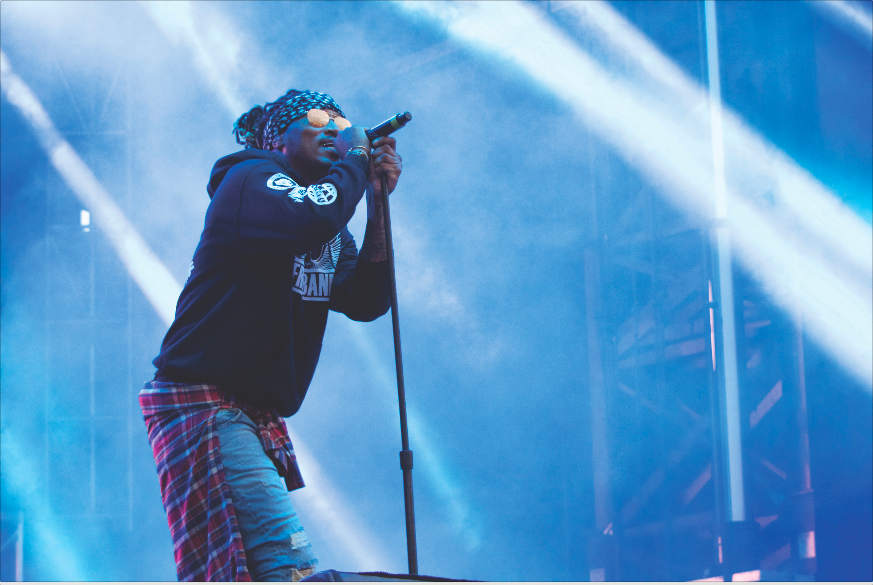 The sold-out festival featured headliners such as Future, Kid Cudi and CHVRCHES.

There is only one place on Earth where you can find Mardi Gras floats, strobe lights and guys dressed in polar bear costumes all while losing yourself in a dynamic combination of house, trap and hip-hop music. Buku Music + Art Project is not just a music festival, but a center of creative ideas that come together to produce an experience unlike any other.

The fifth annual festival was held this past weekend at Mardi Gras World, located on the Mississippi River. The booming amps could be heard the second cars pulled up outside the venue. Despite predictions of a wet weekend, the sold-out event attracted huge crowds of music lovers from all over the world.

The lineup featured big names like Kid Cudi, Pretty Lights, Nero, CHVRCHES, Miike Snow and Fetty Wap. Friday kicked off with Louisiana natives Donovan Wolfington, whose punk rock sound was a contrast to the rest of the artists. Taking the Power Plant stage, the band ripped through several songs from its most recent album, “How to Treat the Ones You Love.”

“It was a new thing for us,” lead singer Neil Berthier said. We’ve never really been to Buku or done this big of a festival. It was kind of a challenge, but in a fun way, not that we couldn’t handle it.”

Indie-pop band CHVRCHES performed its first-ever show in New Orleans. Singer Lauren Mayberry announced that the group was “super used to the rain,” having originated from Scotland. Its set finished up with hit song “The Mother We Share,” gaining a favorable reaction from the crowd.

Other Friday highlights included Fetty Wap’s 15-minute rendition of “Trap Queen” and Kid Cudi’s headline performance. Cudi had an elaborate stage design complete with trees and televisions playing old cartoons. He smoothly transitioned between his slower songs to upbeat ones, making sure he hit some of his classic songs like “Day ‘N’ Nite” and “Pursuit of Happiness.”

The open spaces between stages consisted of a slew of impromptu performers, from break dancers to stilt walkers. Art played a huge role in the Buku experience; the live gallery offered the chance for people to watch artists create one-of-a-kind pieces to be auctioned off.

“[The live gallery] is really open-ended,” graffiti artist Eugher said. “At the end of it, it’s not just you painting something, it’s all of the artists helping and letting you know what you should do.”

“It’s definitely a hometown feeling,” Guarisco said. “We all grew up listening to so much Louisiana music, so when it came to start making our own songs, we didn’t set out to get the Louisiana vibe, it just sort of happens.”

Electro-pop duo Purity Ring was Saturday’s stand out act. The glowing pink stage lights matched the cover of their album “Another Eternity,” emitting the same dreamy, mystical vibe. Miike Snow also delivered a satisfying show for devoted fans. With not much crowd interaction, the music spoke for itself, although singer Andrew Wyatt did ask the crowd about strip clubs in New Orleans before the song “Sylvia.”

After a dazzling laser light show from headliner Pretty Lights, rapper A$AP Ferg threw down in the final minutes of Buku, back to back with EDM group Nero. A$AP Ferg performed his most recent single featuring Future, “New Level,” as well as tracks from his debut album to a packed crowd of enthused fans at the indoor Ballroom stage. People spilled out of the doors while trying to catch a glimpse of Ferg onstage.

“I’ve been hearing about Buku all week, and to finally perform there was dope,” A$AP Ferg said. “There was a ton of energy.”

Fresh lineups, original artwork and exhilarating pop-up surprises have all contributed to establish Buku prominently against the many other older festivals New Orleans has to offer. Wrapping up an extremely successful fifth year, it’s safe to say Buku is here to stay.