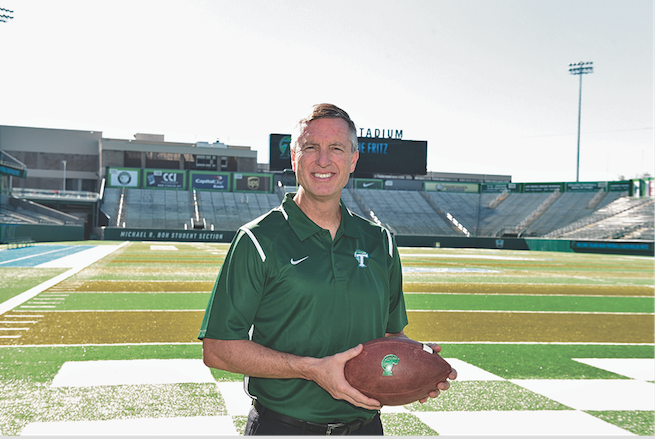 Starting his college football career at Pittsburg State University in Kansas, Fritz was a four-starter at defensive back. Once Fritz realized how difficult it was to become a starter in the NFL, he decided to pursue coaching.

Fritz began his coaching career in 1993 at a small junior college in Brenham, Texas where he pivoted a struggling Blinn College football team in the right direction.

Fritz went on to have a successful three years coaching the Buccaneers and earned a 39-5-1 overall record with two national junior college championships. He was then inducted into the National Junior College Athletic Association Football Hall of Fame for his marvelous turn around of a struggling team.

When he was introduced to the college football coaching scene he was quickly recognized for his ability to transition a struggling and distraught team into a lethal powerhouse.

“He’s a very approachable guy, values his family and genuinely cares about the players,” said Wesley Fritz, Willie Fritz’s son and Tulane football Director of Player Personnel. “He has a great memory and knows all their names and a lot about them and wants to know about them. He’s definitely about winning, but it goes further than that.”

His most recent success came at Georgia Southern where he had a combined record of 17-7 over two seasons. He led the Eagles to a 2014 Sun Belt Conference title in his first year and a bowl appearance in 2015.

He understands the uphill battle that it takes to turn a program around and hopes Tulane will be the next chapter in his book.

“We want to win and our unarguable goal is to get a bowl game,” Willie Fritz said. “What I want to establish with the team here is that I want to sustain success over a long period of time … But when you’re taking over a program that has not had a lot of success, climbing that mountain is difficult, but staying on top of that mountain is even more difficult. That is what we want to do.”

Perhaps his most lethal coaching characteristic is his ability to produce a high caliber team without an SEC roster.

“On or off the field, [Willie] will treat the guys well, with respect and interact with our fans and supporters in a positive way,” Athletic Director Troy Dannen said. “In every way I want a leader that represents the program that’s the face of the department; Willie is it.”

Fritz prides himself and his coaching staff on their adaption to the rosters that are placed in front of them. Though Fritz has been molded into a “triple option out of a spread” offensive style coach, he is by no means set on continuing that style at Tulane unless the football roster is built for it. Running the triple option provides the team with the ability to hand off the ball to three different players.

“It is something that I have talked to my players about,” Fritz said. “I have had people telling me what we are going to run, and heck, I am not even sure what I’m going to run right now. We do not know what we have.”

Fritz has been able to concentrate on strictly football in the recent months, since his wife and his two daughters did not make the journey to New Orleans with him when he was hired for the position earlier this year. His eldest daughter is a sports journalist in Charleston, South Carolina while his youngest is a freshman at the University of Georgia. Fritz’ son, Wesley, however, has also made Tulane his new home, serving as director of player personnel. Fritz has always valued his family and despite coaching changes or being busy, his dedication never wanes.

“[Growing up with him as a coach] was awesome,” Wesley said. “I wouldn’t really trade that for anything. The great thing about him is he always made an effort to come to my games … he’s always made a good effort to separate family from football and encourages his coaches to do the same too.”

Not having the entirety of his family here has been difficult but has helped him focus solely on football.

“Hopefully I will have my family here by April 1,” Fritz said. “That’s how it is when you take a new job and unfortunately your family has to stay behind to sell the house or finish school. I have three grown children so that is not the obstacle this time with the kids. There is good and bad with that. The bad is that I am away from my family but the good is I am really able to focus and concentrate on work. I am probably working 18 hours a day right now.”

The Green Wave has the potential to reform into the outstanding Tulane football team it once was, with Fritz as the head coach.

It takes a coaching staff that is willing to use its talents to dissect the roster and create the most lethal offense and defense possible for success. Coach Fritz has the ability and positive mentality to make it happen. He has the mindset of a winner who does not look back.

“[Getting to] a bowl game is the goal we have right now,” Fritz said. “We want to be able to play in a bowl game. These seniors are not interested in a three-year, four-year or five-year plan. They want to win and they want to win now. One of the things I talked to our guys about is that in order for us to do what we have to do, we have to embrace change.”