Gourmet on a budget rolls up to McAlister 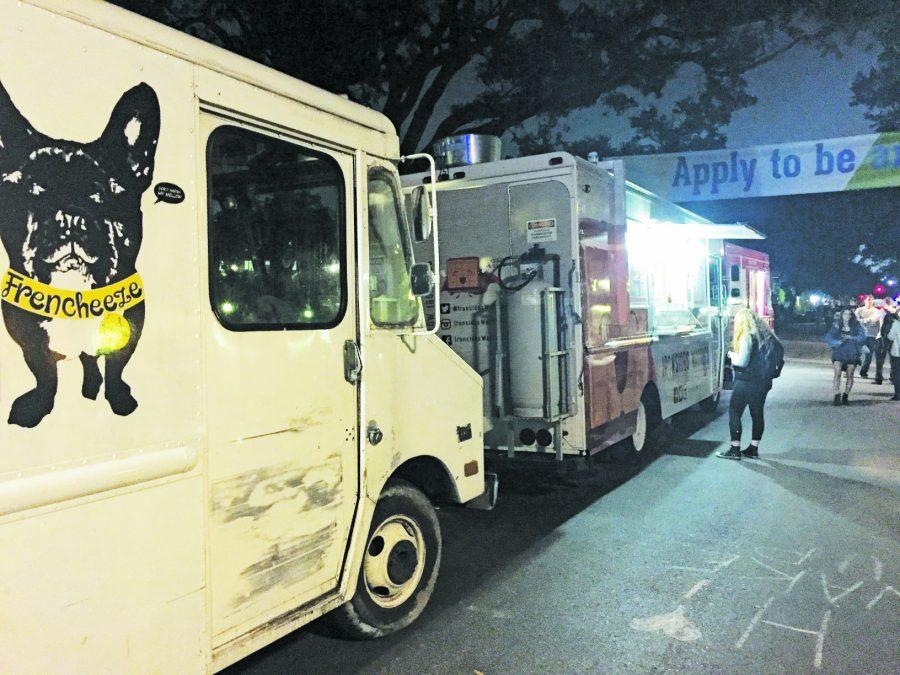 Frencheeze, Ironside Waffles and La Cocinita park outside on Mcalister on Tuesday. The food trucks will be on campus the second Tuesday of every month.

When a few too many Le Gourmet salad runs have left the WaveBuck supply dwindling, and Top Ramen is just not cutting it anymore (let’s face it — it lost its appeal roughly two weeks into the school year), students are basically left out on the streets with nothing. That’s when Tuesday Truck-Ins come nobly by to save the student body from another night of microwave popcorn and disappointment.

Every second Tuesday of the month, New Orleans’ finest in food-truck cuisine roll up to campus bearing marvelous meals at an unbeatable price. Tuesday Truck-Ins are a convenient way to mix up meals without breaking the bank or having to trek it off campus. Ironsides Waffles and Roulez New Orleans Comfort Food, both fixtures on Tulane’s campus, tend to make an appearance, but this event is really a prime opportunity to try trucks like Frencheeze and La Cocinita.

Specializing in grown-up grilled cheese sandwiches, Frencheeze offers everyone’s favorite childhood meal with a new level of sophistication. Options like goat cheese, croissants and pulled pork make grilled cheese gourmet. Frencheeze’s strongest contenders are its fried Mac and Cheese Balls and The Bootz (no, not that Boot), a three-cheese twist on the classic sandwich named after the owner, Jason King’s, french bulldog. For a heartier option, try The Wilbur, which brings the three B’s — bacon, blue cheese and barbecue — together at last.

La Cocinita offers authentic Latin American cuisine and the Chipotle-style convenience of choosing exactly what you want. The truck also caters to various dietary restrictions with a variety of vegan, vegetarian and gluten-free options.

“Our menu has a step-by-step build-your-own set-up so that people can completely customize their meals,” co-founder of La Cocinta Rachel Angulo said. “We offer vegetarian and vegan options, and almost everything on our menu is gluten-free.”

The arepas, Venezuelan cornmeal patties with meat and cheese, come at high recommendation by Angulo, though the menu also offers classics like tacos and burrito bowls. They also boast an impressive array of sauces and authentic Latin American extras like horchata and maduros, or sweet plantains. The emphasis on authenticity is owed to the fact that Benoit Angulo, the other founder of La Cocinta, hails from Caracas, Venezuela.

“Our chef, Benoit, went to culinary school in Venezuela, so the food is both gourmet and authentic,” Angulo said, “And given that both owners worked for several years at Commander’s Palace, we place a strong emphasis on customer service.”

Any student looking for a cheap, easily accessible meal that is sure to satisfy is in luck thanks to these Tuesday food trucks.