‘Voir Dire’ fails to make racial impact it needs to 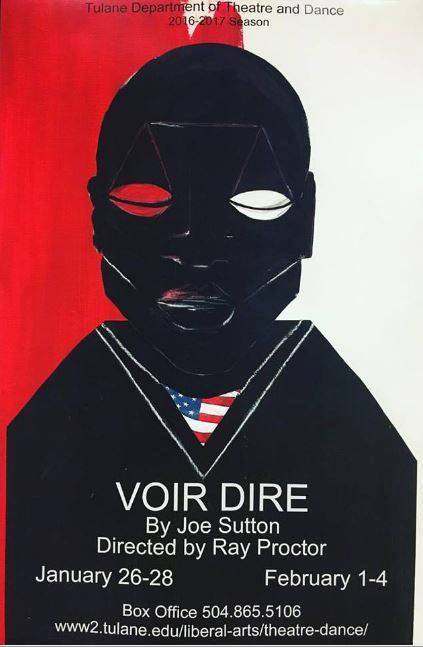 Photo provided by Tulane Department of Theatre and Dance

A New York school principal loses his career and is deemed a felon, a white man pushes a Latina mother nearly into labor, two black women safeguard a jury that puts another black man in prison, and it all happens in the close proximity of the Lupin Black Box Theater.

During its 8 p.m. showing Thursday, the Tulane Department of Theatre and Dance undertook the challenging role of presenting Joe Sutton’s “Voir Dire,” a play aimed at addressing racial bias in the American justice system.

The show featured six — mainly white — jurors, with the exception of an expecting Latina mother and two black social workers. Jurors were tasked to settle a verdict on a charge of a crack cocaine purchase by a black principal.

The majority of the play featured the deliberations between jurors regarding the everlasting imbalance of emotion and logic in the courtroom. Standout performances are easily noted as Zelda Kimble’s portrayal of Gloria Neiman and Keyara Milliner’s of Debra Whatley.

Kimble succeeded in depicting an overtly-prideful white savior complex that is oftentimes misunderstood by self-proclaimed white allies. Kimble’s character, Gloria Neiman, acted as though racism in the justice system was her struggle to solve and her understanding of the systematic problem was equal to black juror, Debra Whatley.

The hatred Kimble strategically garnered for Neiman served as a strong representation of a common animosity toward excessively loud white allies. At one point during the show, Neiman was shouting at a fellow juror — attempting to persuade them of their racist actions — but in actuality, she was masking the voice of Whatley and denying Whatley of the opportunity to speak to her own experience.

Milliner captivated the audience and achieved the difficult challenge of portraying the ease of silencing black voices in white majority. Milliner’s character, a social worker that assisted young troubled women in the community, encountered significant obstacles in projecting her own experience with racism in the justice system amid argument among other jurors regarding their own potentially racist perceptions.

While the play left the audience with a newfound understanding of juror perspective and judicial decision, it failed to make the racial impact needed for many students.

The script lacked a heart-wrenching moment that would provoke white audience members to fully understand the extent of racial bias in the American criminal justice system.

The department’s performance mostly allowed for audience members to feel sympathy for white racist characters rather than perceive them as in the wrong. The selection of a play that leaves the audience with an undoubting perception of existing American racism would have been most effective for the contemporary political climate and vitality of the Black Lives Matter movement.

The performance deserves to be applauded for bringing a conversation of race and its potential role in the courtroom to the theater, but the show did not provoke audience members to be increasingly proactive in their personal dialogues.