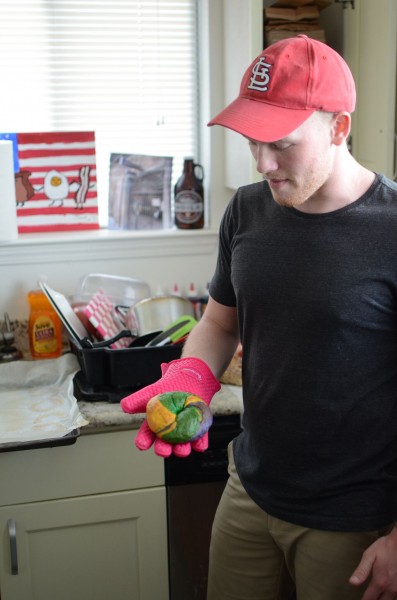 Bagels aren’t just a doughy treat or an on-the-go breakfast. For some, they are a lifestyle. Recent Loyola University New Orleans graduate Brendan Dodd, known by many as Bagel Boy, launched his bagel delivery business only a few months ago but is already making a name for himself in the New Orleans area.

“When I used to work at Humble Bagel, I would take the day-olds … they would usually just throw them away,” Dodd said. “I wasn’t really a fan of food getting wasted.”

Dodd uses the Facebook page Tulane Classifieds as his resource for finding new customers. For a $2.95 delivery fee, he delivers homemade bagels by bike across New Orleans, from St. Charles Avenue to Esplanade Street. Initially gaining traction by delivering leftovers from Humble Bagel, Dodd eventually decided to begin baking them himself using a recipe of his own invention. After about five months, he became well-known for the bagel delivery service, acquiring the moniker “Bagel Boy.”

Though the business is new, Dodd claims Bagel Boy garnered much success quickly, due in part to social media. According to Dodd, about a month ago, the Bagel Boy Instagram account had only 120 followers. That number is now 1,343 and continues to grow.

“Social media is a huge factor with a business, and so I think a prime example for why my Instagram subscribers have gone up so quickly and so fast is because I’ve been featured in ten separate Instagram food accounts,” Dodd said. ” … I make an attempt to post at least once or twice every day. Those people are going to be more willing to follow me if I post constantly.”

Of his more notable Instagram posts are those that feature the Mardi Gras bagel, a themed green, yellow and purple bagel pioneered and exclusively sold by Bagel Boy. In fact, such colorful bagels are a part of what made Bagel Boy stand out from other bagel shops, along with its unique bagel delivery service.

This February, Dodd is in the process of producing Valentine’s Day bagels, which are bagels dyed and shaped into red hearts. Other bagels will be rainbow-colored.

More than focusing on Bagel Boy’s budding recognition around the greater New Orleans area, Dodd must also look to the future. He has already begun planning the next steps of his bagel enterprise.

Dodd hopes to land a steady location before the end of this year in Mid-City so that delivery times can equal out for all customers. In addition to a standing location, he wants to add cars to the delivery force and sandwiches to the menu.

“Think both of [Humble Bagel and Jimmy John’s] but in one, and that’s what I’d want to do,” Dodd said. “I’d also want to have like a coffee-style bar or something like that. I’d want it to be very aesthetically pleasing.”

Until Bagel Boy becomes an establishment, bagel enthusiasts can find Dodd biking around the city, complicit in the carb-loading of many New Orleanians.