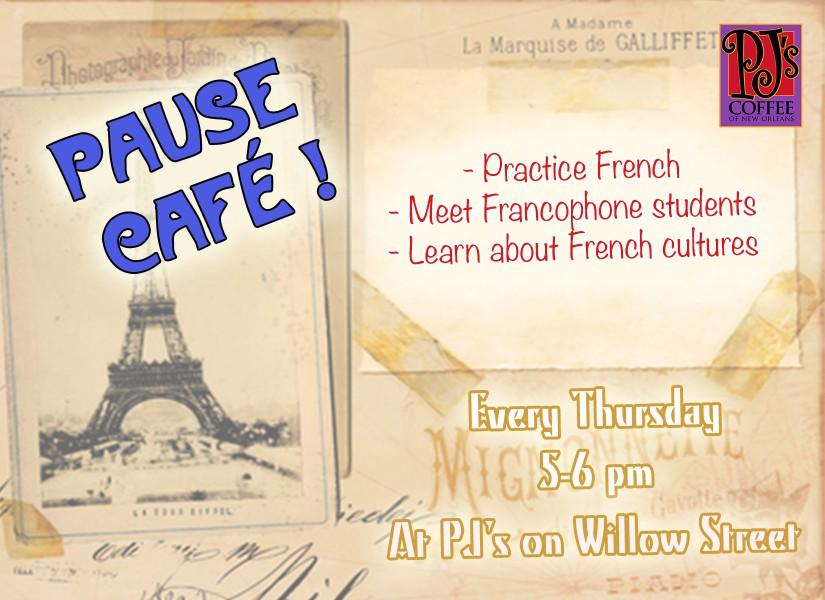 Courtesy of Tulane Department of French and Italian

New Orleans lies at the intersection of African, French and Cajun cultures. Tulane University’s Department of French and Italian hosts several events on campus to celebrate New Orleans’ French cultural heritage and the French language. The Pause Café, a weekly roundtable French-language discussion hosted by the department, gives community members the opportunity to engage in meaningful discussion with native French speakers and other students interested in French culture.

The discussion takes place from 6–7 p.m. every Thursday at the PJ’s Coffee on Willow Street. It is open to anyone, including non-Tulane affiliates, but the program is directed at students who are studying or have studied French and want to improve their conversational skills. Attendees sit around a table and have a conversation with two native French speakers and a few other students. Topics range from French politics to Parisian museums.

“It’s a kind of a discussion that can lead to any topics that the people around the table are interested in, and so it’s kind of a free style conversation,” French Language Program Director Annette Sojic said.

Each year, the director of the French language program appoints two French exchange students to lead the discussions. This year Nathyfa Michel and Émile Bouchez, two graduate students from Paris, are in charge.

The Pause Café is popular among students planning to study abroad in a francophone country. Participants can improve their listening comprehension and gain confidence speaking the language while simultaneously learning about the culture.

“We are here as ambassadors of French culture, being native French speakers and having lived in France or francophone countries for most of our life,” Michel said. “And so we’re just there not so much as instructors, but as students with experience in a different culture …”

A similar program, called Pause Café Adulte, is available for Tulane faculty and staff who have studied the language in the past and want to maintain or improve their level of proficiency. The cafe was started by poet and Creative Writing Program Director Peter Cooley, Louisiana’s 2015 poet laureate. This semester, Pause Café Adulte meets at 12 p.m. every Thursday in a conference room in the Lavin-Bernick Center for University Life.

The department also hosts French Ciné Club. About once every few weeks, the club screens French-language movies relevant to a francophone culture. Michel and Bouchez, who are also in charge of French Ciné Club, try to choose movies that showcase little-known aspects of French history or culture.

On Feb. 14, the French Ciné Club screened “La Haine,” a critically acclaimed 1995 French drama that follows the lives of three young immigrants living together in Paris the day after a riot. The next movie will be shown on March 7 in room 403 of Newcomb Hall. Michel and Bouchez have not yet decided which film will be shown.

Like the Pause Café, French Ciné Club provides students with an opportunity to engage in a francophone culture while learning the French language. Both activities promote cultural diversity on campus.

“One common language can create bridges from one culture to the other,” Michel said.