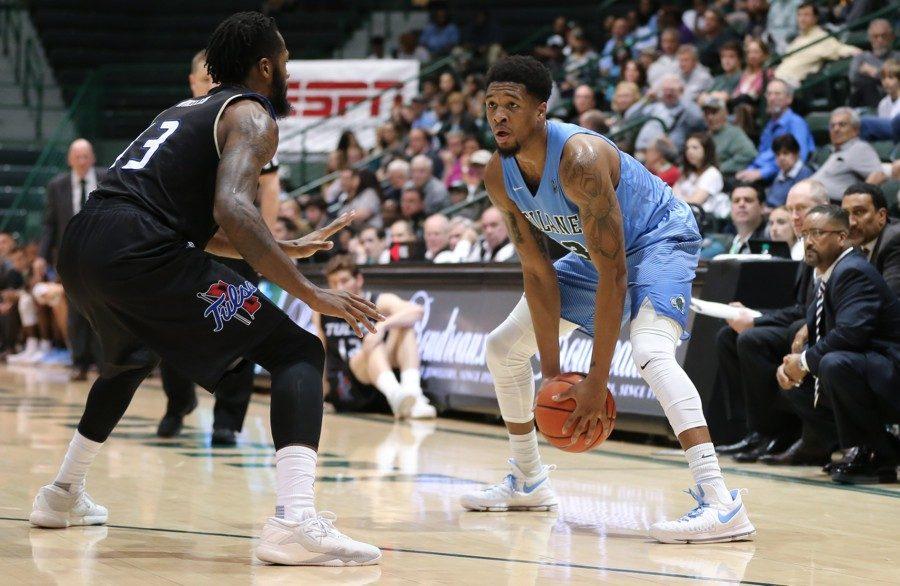 Every game is sudden death: lose and go home.

The end of the regular season marks the beginning of the pinnacle of collegiate basketball, officially known as March Madness.

Before the best 68 men’s and women’s teams from across the nation “lace them up” to compete with the ultimate hopes of becoming the undisputed college basketball champion, conference tournaments must be played.

With records only playing a role in the seeding process, every team enters with a clean slate and an equal opportunity to be a champion.

No. 5-seeded Tulane women’s basketball (16-14, 7-9 American Athletic Conference) did not obtain its sought-after revenge against No. 4 Central Florida (20-10, 9-7 AAC) in the quarterfinal round of the AAC Championships on March 4 at the Mohegan Sun Arena in Uncasville, Connecticut.

After holding the lead for almost half an hour, the Green Wave ultimately fell to the Knights 61-57 in the closing minutes. Junior guard Kolby Morgan led the team with 25 points on 8-of-10 shooting. Morgan was the only Green Wave player to score in the double-digits, making this her 17th game this season scoring more than 20 points.

Both teams emerged ready to continue the back-and-forth after heading into halftime tied at 20. Morgan scored eight of the team’s 14 points in the third quarter and the defense prevented UCF from getting on the board for five minutes. When the period ended, the Knights could make a comeback, heading into the final quarter with a one-point deficit.

With a score of 34-33, the game came down to the wire. UCF senior guard Zykira Lewis sunk two 3-pointers that gave UCF a 53-52 lead with just under two minutes left of regulation play. Four free throws later, the Knights were up 57-52 with 31 seconds left.

Morgan quickly shot a three, cutting the lead 57-55. Lewis responded by making two free throws to bump the lead back to four. Sophomore guard Meredith Schulte made it a one-possession game after Lewis’ shot with a layup 20 seconds before the final buzzer.

As the final seconds of the clock wound down, the Green Wave received its first ever loss in an AAC quarterfinal.

“It’s so disappointing because we’ve had so many close ones over the last five games and weren’t able to finish them off,” head coach Lisa Stockton said. “I thought UCF did a great job, especially in that fourth quarter. Our turnovers [were] the big stat for us. We just gave them too many opportunities.”

While they did not find a championship win, the Green Wave still has opportunities in post-season to make its final 2016-17 season splash.

After a string of losses, the men’s basketball team ended its regular season and senior day celebration with an 81-69 win against Tulsa on Sunday at Avron B. Fogelman Arena in Devlin Fieldhouse.

Despite Tulsa taking an early 12-8 lead, the Wave came back and created a double-digit lead of 24-14. Five minutes into the second half, Tulane maintained its lead with a 56-38 advantage. Tulane did not let Tulsa take the lead again and secured the win.

“I think this group is probably playing better than they have all year … ,” assistant coach Anthony Wilkins said. “My expectation is that our guys play well … our expectation is to go and get three wins.”

The Wave next plays on Thursday in the first round of the tournament against Tulsa. With both teams playing each other so recently, the pressure is on for both of them.

“We have to play a full 40 minutes each game that we play starting out with this first one,” redshirt junior guard Cameron Reynolds said. “We can’t look past Tulsa. We have to come out and play with the same intensity we played with last time.”

Tulane enters the tournament as the underdog, with CBS Sports analysts unanimously predicting its loss in the first round. USA Today Sports ranks Tulane as the worst team in the conference.

“The accomplished former NBA coach [Mike Dunleavy, Sr.] brings instant credibility to a program in desperate need of it, but don’t expect that to translate into wins,” a USA Today sports analyst said.

After a season of growing pains, the team believes it is coming together as a unit and will prove that this coming weekend in Hartford, Connecticut and prove that post-season play is all about the unexpected.

“Our greatest strength is that we really know our identity and know who we are,” redshirt sophomore guard Riley Conroy said. “Going into a tournament like this if you try to be anybody but yourself, you’re not going to come out on top.”

The game tips off at 5 p.m. on Thursday, March 9 in Hartford, Connecticut. The game can be viewed on ESPNews.