The Tulane Hullabaloo • May 25, 2015 • https://tulanehullabaloo.com/2074/sports/fresh-faces-will-bring-new-level-of-talent-to-wave/

Fresh faces will bring new level of talent to Wave 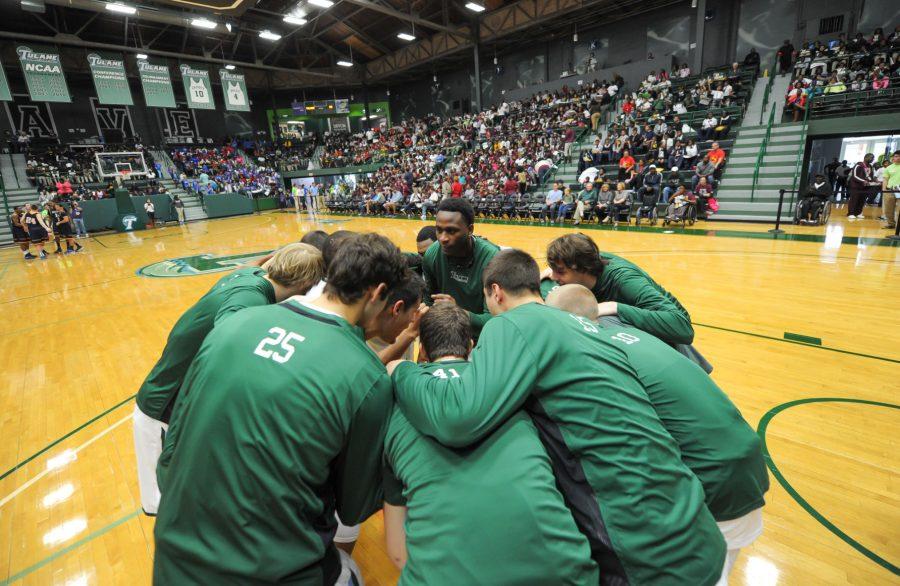 For Tulane head coach Ed Conroy, his basketball’s roster will look nothing like the 2014-15 campaign.

With a mass exodus of players that looked like a repeat of the summer of 2013, when six key contributors graduated or transferred from the program, Conroy’s primary ball-handler and rising junior, Jonathan Stark, along with rising junior Payton Henson, who averaged 18 minutes per game, rising sophomore Keith Pinckney, rising juniors Josh Hearlihy and Aaron Liberman are in the process of transferring, and rising sophomore center Stanley Roberts Jr. has request a leave from the program.

Counting the two graduating seniors in Jay Hook and Tre Drye, Conroy had to replace eight players, and he did not disappoint.

Conroy also made a splash in May, when swingman Melvin Frazier, the No. 3 ranked prospect in Louisiana according to ESPN, Von Julien, a speed demon point guard who recently won the Class 2A state champion ship in the 200-meter dash, and averaged 9.2 assists in his high school career and Kipper Nichols, a 6-6 forward from Lakewood, Ohio all decided to commit to the Wave, completing a class that ranks in the top 100 on 247sports.

Along with the new recruits, former Washington center Jenard Jarreau, who had recently announced he would transfer to Oklahoma State, decided to take his 6-10 240lb frame back to New Orleans for his final two years of eligibility.

Jarreau sat out the 2013-14 season with a torn ACL, but played 21 games this season, including a six-point, seven-rebound, four-assist and three-block performance against Tulane Dec. 22 in the 66-57 Washington win. He averaged 17.9 points, 9.8 boards and 3 blocks per game in 2011 while playing for McDonogh 35 Senior High School in New Orleans.

Along with the eight newcomers, former LSU junior guard Malik Morgan, will be eligible to play after sitting out a year due to transfer rules and rising junior Cameron Reynolds will return after a broken bone in his left hand sidelined him in all but nine games in 2014-15.

The two guards will compete with lone rising senior Louis Dabney, who was the leading scorer for the Wave with 13.6 per game as the two-guard aside Stark, Harris and Julien for minutes, and though Dabney has a solid handle, Julien has expectations to come in a make an impact as the starting point guard right away.

Even with Hook and Stark’s departure, Conroy has a chance to form an explosive combination of guards.

Evident from last season, Conroy’s big-men were undersized at most every position.

Drye, at 6-6 with a faulty outside jumper couldn’t stretch the floor from the power forward spot, rising junior Ryan Smith struggled on both ends of the court creating his own post up opportunities and guarding bigger centers in the American Athletic Conference. Rising sophomore Dylan Osetkowski sparked some offense for the Wave, but was undersized against many big men within the AAC.

With the incoming Paul, Oliver and Jarreau, Smith might see his role diminish with the new eclectic group of big men. Osetkowski could provide a vital offensive punch at the four spot, providing Conroy a big that can rebound, finish at the rim and stretch the defense with Paul and Jarreau muscling their way at the center position. Oliver can also stretch the floor, and would provide a solid spark off the bench.

The wing position now features Frazier and Nicholls, both players at least two inches taller than Hook. The two swingmen are lengthy and can score in different ways. Expect Conroy to take advantage of this position’s length on defense.

Though the Wave will look nothing like any regime under Conroy thus far, this team has a chance to compete against most teams in the NCAA, with improved depth at every position.