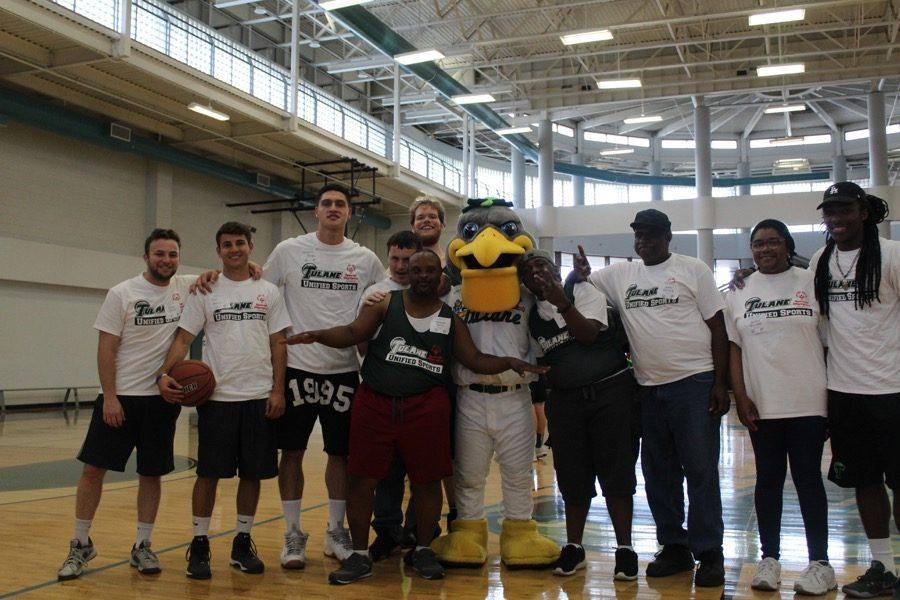 Members of Tulane's football, baseball and men's basketball teams led clinics and drills with participants from the Special Olympics Unified Sports program on the basketball courts of the Reily Center on March 18.

While most of Tulane’s athletes are deep in the throes of the offseason, members of various teams have shifted gears from dunking and diving to community outreach.

On Saturday, several Tulane athletes participated in a clinic for members of the Special Olympics Unified Sports program. The two groups participated in basketball drills and swim practice in the Reily Student Recreation Center.

Represented teams included football, men’s basketball and baseball, running six stations on essential parts of basketball such as passing, shooting and dribbling. There was also a station devoted to scrimmaging. Tulane swimming and diving held its own practice for Special Olympic team members in the Reily natatorium.

“It puts a lot into perspective, and it really opens your eyes to people who are happy,” Slater said. “We’re all happy as humans, and we just love each other and [are] there for each other. Sports can unify us.”

This is the second clinic that Tulane has hosted for the Special Olympics this year. During the first clinic, held in February, Tulane athletes from many different sports watched and cheered for their team members during a scrimmage game held in Reily.

The event became the first featured event in Tulane’s “PJ’s Pick-Me-Up” series, highlighting student-athletes who make a difference in the New Orleans community. In the promotional video released on Feb. 6, sophomore punter Zachary Block shared his thoughts on the event.

“These kids look up to us, and it’s really nice to give back,” Block said during the first clinic. “I know it means a lot for them …”

The event drew around 50-60 members of the Special Olympics program, as well as a special guest, according to Slater.

“Riptide came, and he played defense in the middle of our passing drill,” Slater said. “[The participants] were all really excited. I was even excited. I felt like I was a part of it. I was like, ‘I have to get this ball past Riptide.’ It was great. We all gave him a big hug and took pictures with him.”

At the end of the day, Slater said that he and his teammates walked away from the clinic appreciative of the new experience and eager to participate again in the future.