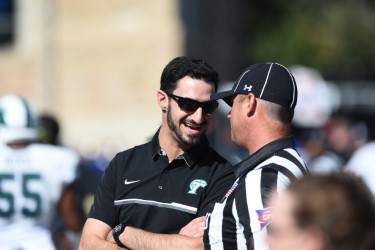 Football recruiting graduate assistant Jacob Stone begins every morning at 6 a.m. by watching ESPN while eating breakfast in the Wilson Athletics Center. Stone moves on to meetings and without fail, by 8:30 a.m. every morning, steps onto the turf on Benson Field at Yulman Stadium.

From helping with offense and reading plays to signalers during practice to giving tours to visiting recruits, Stone never stops.

After his tours, he breaks for lunch then heads back to Wilson for an afternoon of charting catches, data entry and handling miscellaneous recruiting tasks.

While the work day ends after a staff meeting at 4 p.m., Stone’s day does not. He organizes, grabs dinner and heads to class, where he is working to earn his Master of Liberal Arts.

Working for the football team while balancing school is not a new routine for Stone. He graduated Tulane in 2016, obtaining his Bachelor of Science in Management while working with the football team all four of his undergraduate years at Tulane.

“I knew I wanted to [work for the team] by the end of my senior year in high school, and I had gotten in touch with Director of Football Operations Doug Lichtenberger and emailed him throughout the summer,” Stone said.

Stone is taking his childhood love of football and turning it into his dream career. Growing up in Cleveland, Stone played soccer but soon realized it was not the sport for him and sought a change.

“When I was 13, in seventh grade, I was the worst soccer player you could ever imagine,” Stone said. “… I was talking to my parents about trying to play football next season in 8th grade, and my dad wasn’t having it. I was way too skinny. I was 5-foot-11 to 6-foot, 150 pounds soaking wet with my book bag full.”

That is when Stone was faced with a family tragedy.

“My dad passed away before football started in eighth grade,” Stone said. “I was 13, Aug. 11, 2007 … and I was very close to my dad. The funeral was held two days after on Aug. 13, the same day that football practice started.”

His mom, wanting to help him through the heartache, told him on the first day of the Jewish tradition of sitting Shiva, to ride his bike and go to football practice.

“That sort of served as a release of all the pressure and hardship throughout that time,” Stone said. “I wasn’t a good football player. It wasn’t like I was much better at football than I was at soccer, but the physical nature of it, the fact that you were allowed to hit people — and I certainly wanted to hit people at that time — and the camaraderie, the teammate nature of the sport gave me a lot of things … and I gained a lot of male role models that I would’ve lacked otherwise, which is incredibly important when you don’t have a dad.”

Stone continued to play football through high school and wanted to continue playing in college but felt the interested Division III schools were not the right fit for him.

Coming to Tulane felt right to Stone, and he remains appreciative of all his mom did to give him the opportunity to attend. Since he first contacted Lichtenberger, his mindset has been on coaching competitive football.

“We were fortunate enough I got in and all thanks to my mom who … never said no because I was doing what I wanted to do, doing what I love, and it wasn’t going to get me locked up in jail …”

While a career in football was not in the cards for Stone, he believes he was destined to be a recruiter.

Asking questions in every meeting and absorbing as much knowledge as he can is what Stone sees as one of the most valuable aspects of his job. He enjoys being the least knowledgeable in the room because it allows him to ask the most questions.

“I can learn as much as I can and get a free education, especially from Tulane — holy cow — that’s awesome,” Stone said. “I want to enjoy every stage of it and coach football the rest of my life. I’d probably never retire or else I’d go nuts.”

No matter the adversity or the struggles he may endure, Stone aims to remain positive on all fronts.

“Always have a silver lining, always,” Stone said. “That’s the way you have to look at things. I learned that when my dad passed away … if you hang on to [negativity] and keep moping, you’re getting nowhere and holding yourself back …”

Stone is appreciative for all he has received in life and hopes to help others achieve their dreams, just as he is reaching his.

Football may be his job and his dream, but it is not the only thing Stone wants to be associated with himself as a person.

“I just want people to remember me as that guy that always walks around campus with a smile, that’s all I care about. That’s what I want to be my legacy.”