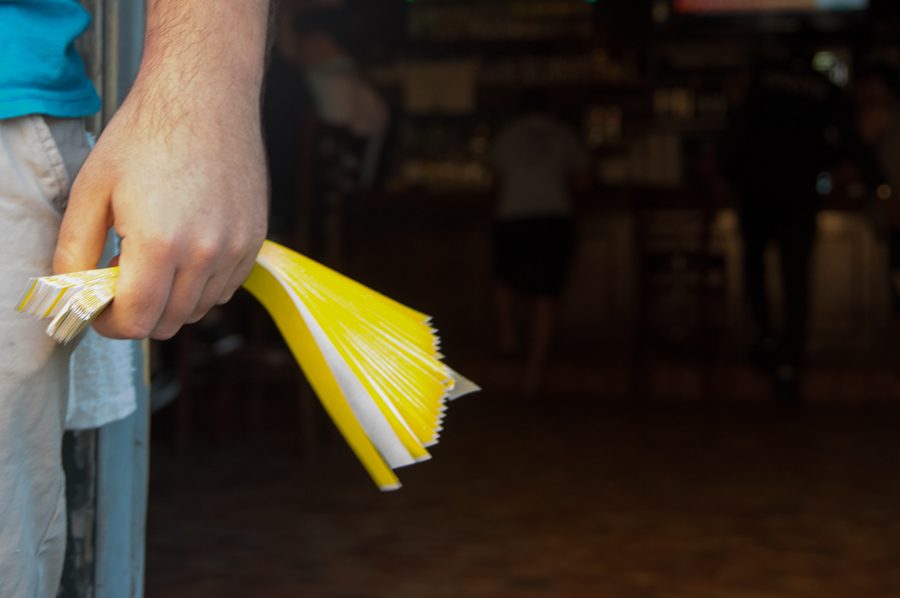 Wristbands, like the one pictured above, are frequently given out by local bars to identify patrons that are 21+ and can order drinks.

In a city known for lax liquor laws, a rowdy bar scene and Bourbon Street and at a school known for topping “best party school lists” by trustworthy authorities like Total Frat Move, Princeton Review and Niche year after year, it does not take much to drum up a mental image of nightlife at Tulane.

At first glance, this means the “typical” college social scene on steroids. Most who come to school here recognize the “work hard, play hard” mentality that pervades campus, but the implications of this culture run deeper than the pressure to go out on a weeknight. Despite the variety of 18+ bars around campus, many students acquire fake IDs to supplement their nights out. Some view this as an optional aid for getting into 21+ concert venues or the occasional night out with friends, while others feel it is a necessity on Tulane’s campus.

Tulane students hail from a wide range of suburbs, cities and rural areas, so their perceptions of fakes vary as well. In some areas, having a fake in high school is the norm, which leads to relaxed attitudes about needing them in college. In areas where owning a fake ID in high school is uncommon, students rush to get them the summer before college, assuming they will be a necessity once freshman year comes around.

“Honestly, I think as a senior graduating from high school, my high school group of friends felt like it was absolutely essential to have a fake,” sophomore Caroline Camp said. “Then I came here, and I didn’t really feel pressure about it.”

Though opinions are divided on how necessary owning a fake ID is at Tulane, students seem to agree that the overall attitude toward them is in no way as strict as other areas of the country.

“One time my sister got into a bar here by writing ‘I’m 21’ on a post-it note,” freshman Mia Groedel said.

Most attribute this indifferent outlook to the drinking culture that is so ingrained in New Orleans. What sets Tulane apart is not necessarily the number of fake IDs, as they’re commonplace at most colleges but rather the feeling that using them in New Orleans carries low risk, which encourages more students to own fakes.

“I think it’s risky that it’ll get taken away. I don’t think you’ll really get in trouble if you use it,” sophomore Steven Stradley said. “Because what are they going to do? Detain you while the cops get there? No, they’re just going to take it or just deny it.”

Others feel that the low risk is exactly why getting a fake isn’t worth it. Many students claim they don’t have their IDs checked anyway, so owning one is a waste of money.

“I’m not even … ID’ed most of the time, but when I am ID’ed, my fake typically works like a charm …” a male freshman from Boston said. “All my friends, going to school in other places, they have all the same issues that we used to have at home, but not having that issue and inconvenience is a real plus of New Orleans. If anything, kids at Tulane have fewer fake IDs at Tulane than at other schools because the bars in the city are so lenient with alcohol …”

As the home of the Hand Grenade, the drive-thru Daiquiri and the infamous Hurricane, it seems options for using a fake abound across the city. Venues near campus, however, get the most traction among fake users, though some students do try their luck at restaurants and bars downtown and in the French Quarter.

Despite the high risk involved with using an illegitimate ID, many students are still surprised to find their fake turned away. Bouncers have seen it all, from shock and horror, to tears and insistence that the ID is real.

“My favorite is when I get a Maryland ID, and I’m like ‘oh’ and I call their town and I’m like, ‘what county is that?’ They don’t know it.” The Boot Store staff member Bobby Martin said.

New Orleans’ notable nightlife has contributed to a more relaxed drinking culture, the effects of which are certainly felt on Tulane’s campus. But while students perceive New Orleans as easier on fake IDs than their hometowns or the colleges their friends attend, fake ID culture is not necessarily more prevalent on Tulane’s campus than anywhere else.

Cam Lutz, Cadence Neenan, Caroline Kohl and Emily Ahmad contributed to the reporting of this article.