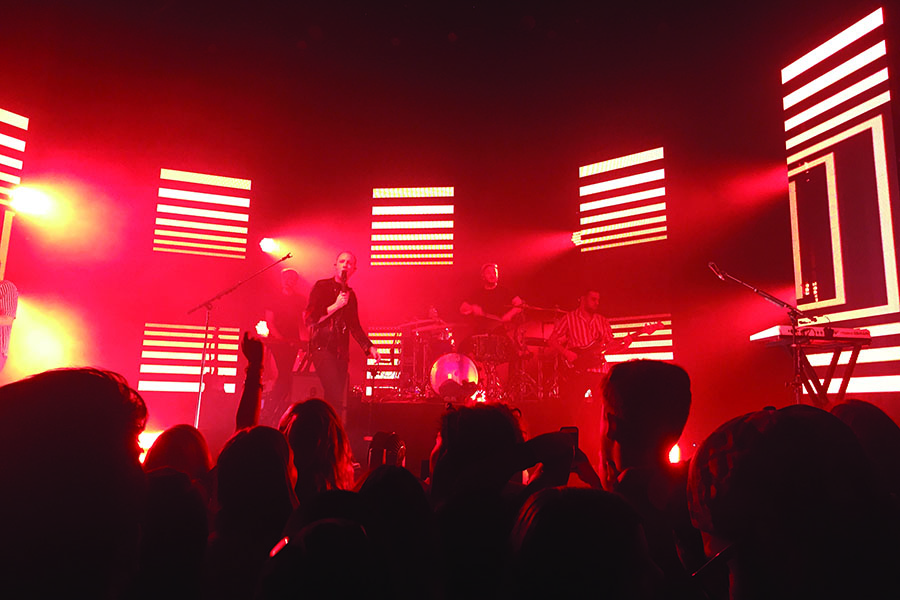 Inside New Orleans’ Joy Theater, you wouldn’t know it was a Monday night. Two Door Cinema Club came out in a cloud of fog interspersed with rapidly flashing white lights.

The band opened Monday with “Undercover Martyn,” a popular song from its first album, “Tourist History.”

The Irish electronic rock band is comprised of three members: lead singer and guitarist Alex Trimble, guitarist Sam Halliday and bassist Kevin Baird. Trimble and Halliday were school friends who joined with Baird to form the group in 2007.

Throughout the show the band members moved around on stage, sometimes facing each other while performing, other times dancing as they sang. But the most memorable parts were Trimble’s dramatic flourishes. Fully looking the part of a rock star in an unbuttoned velvet shirt and layered jewelry, he occasionally forewent his guitar for songs that focused more heavily on vocals. Throughout the songs, he would punctuate lyrics and high notes with arm movements and gestures to help draw attention to the song meanings.

The group continued to keep an upbeat tempo throughout the show, playing a medley of songs from its three albums. It also utilized lights to help make the experience both a visual and auditory one. The light backgrounds changed consistently between songs, helping set the mood for each. “Changing of the Seasons” had a soft orange light to match the relatively slow tempo of the song, whereas the faster paced “Eat That Up, It’s Good for You” employed flashing multicolored lights that moved in sync to the guitar riffs.

In between songs, the members of the band took turns speaking to the audience, talking about the band and their love of New Orleans. The crowd clearly loved them as well, jumping and moving to the array of songs played. Two Door Cinema Club sounds excellent live. Trimble is able to hit high notes with ease, making the songs come to life in front of audience members.

The crowd sang along to the band’s better-known songs like “Sun” and “Something Good Can Work.” Those who didn’t know the words still found themselves wrapped up in the experience, dancing to the quick rhythm of the guitar. Regardless of who knew the words, the audience was rocking out by the time Two Door Cinema Club closed the concert with its best-known song, “What You Know.”