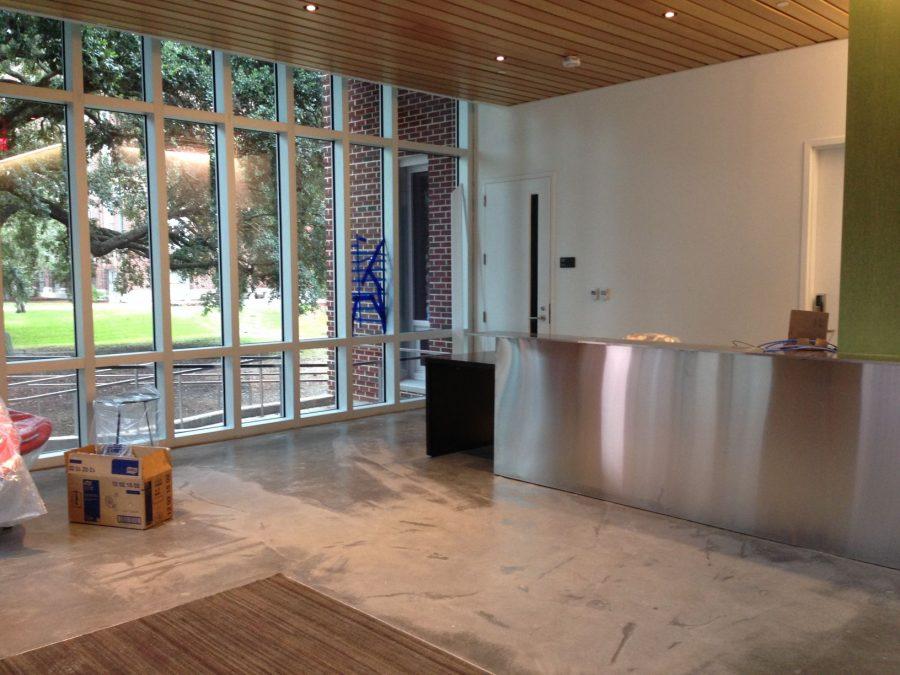 The interior and exteriors of Greenbaum house are still under construction as students begin to move into the resident hall.

Construction on Barbara Greenbaum House at Newcomb Lawn continued as some students began to move into Tulane’s newest residence hall. Parts of the building’s interior and exterior grounds remained unfinished as many students involved with EXPLORE programs and other commitments arrived this week.

”We were given the certificate of occupancy about two weeks ago,” Montague said. “That being said, there’s still a lot of things to do. All the furniture was installed. They were trying to finish up some painting, finish up that structural kitchen on the first floor, and extras are what they’re working on real hard right now. In reality it’s occupiable.”

Sophomore Danielle Roof, a resident advisor in Greenbaum, said she agreed with Montague.

Montague said the university took measures to ensure the safety of students as work on Greenbaum continues. Contractors will no longer have the same access to individual rooms as they had before students moved in.

“There was a transfer, or turnover, of keys as soon as we put anybody in there,” Montague said.

Greenbaum’s lock system is connected to the school’s Wi-Fi system. Montague said the doors would stay locked if the Wi-Fi were to crash.

If the locks did go into a lock mode, Greenbaum RAs are prepared to deal with the situation.

“If anything like that were to happen, people still could get into their rooms,” Roof said. “On each of [the doors] is a physical lock and we have the master key.”

Some Greenbaum residents have complained about the construction’s inconveniences.

Sophomore Alexis Madormo complained that the entrance to Greenbaum is currently obstructed by temporary orange fencing, limiting student access to the building.

One of the only means of entering Greenbaum was a narrow handicap ramp while the building’s main stairs were blocked by temporary plastic fences secured to the railings.

“It’s a little inconvenient, I think, for everybody, but I trust Tulane will get it done,” Madormo said.

She compared construction on Greenbaum to the ongoing renovations of Howard Tilton Memorial Library.

“With the banging [in the library] everyone was fine,” Madormo said.

Montague did not give a specific date for the completion of Greenbaum, but he said that the remaining work is mostly cosmetic and should be resolved soon.