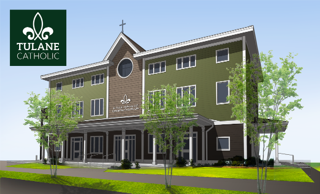 The groundbreaking of the new Father Val A. McInnes, O.P., Center for Catholic Life will be held on Sept. 7.

The Tulane Catholic Center will be holding the groundbreaking for the new Father Val Ambrose McInnes, O.P. Center for Catholic Life at 4 p.m. on Sept. 7. President Michael Fitts and Archbishop of New Orleans Gregory Aymond will be in attendance.

The original Catholic Center building was demolished in June. The new building, which will be located at 1037 Audubon St., will include many amenities in hopes of expanding the impact and community efforts of the center, according to its website. These new amenities will include office space for the chaplain and staff, study spaces, a new porch facing Zimple Street, a 100-seat chapel and a full-service kitchen.

The building is named after Father Val Ambrose McInnes, who was the first pastor of the St. Thomas More University Parish. He was heavily involved in the Tulane community before his death in November 2011.