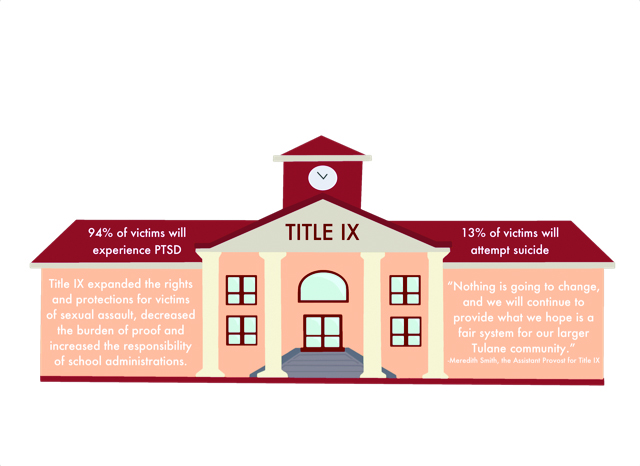 The U.S. Department of Education officially rescinded its guidance for universities and protections directly related to Title IX on Sept. 22. The official statement did not indicate the reasons for this policy change, but the announcement came shortly after a statement by Secretary of Education Betsy DeVos, in which she discussed making changes to Title IX protections to ensure proper due process for those accused of sexual assault.

Betsy DeVos claims she hopes to repair the culture of sexual assault for all students on college campuses. Instead, however, she looks at anecdotal occurrences of false accusations and concludes that Title IX measures intended to protect university students are systemically flawed.

The rescinded policy stems predominantly from the so-called “dear colleague letter,” released in 2011 by the Obama Administration. This language largely expanded the rights and protections for victims of sexual assault, decreasing the burden of proof for a conviction and increasing the responsibility of school administrations to investigate these assaults.

Meredith Smith, Tulane’s assistant provost for Title IX and Clery compliance, indicated that while these guidelines have changed in nature since DeVos’s comments, Tulane’s ability to handle sexual assault will not be hindered.

“Nothing is going to change, and we will continue to provide what we hope is a fair system for our larger Tulane community,” Smith said.

It is commendable that Tulane administrators do not plan on changing their Title IX policies and systems. This, however, does not remedy the fact that DeVos’s comments have the potential to revert the national conversation around sexual assault back to a culture of blissful ignorance that has historically existed on college campuses.

Some students may agree with DeVos’s concern for false accusations and a lack of due process for the accused. According to Tania Tetlow, Tulane senior vice president and chief of staff, however, the problem of false reporting does not appear to be an issue unique to sexual assault.

Victims of sexual assault bear a heavy burden, with 94 percent being likely to experience PTSD and 13 percent attempting suicide. DeVos’s comments and Title IX rollbacks suggest an equivalence between victims of rape and those falsely accused, and they are an insult to these victims.

The change in guidelines that DeVos enacted appears to be more symbolic than substantive and thus cannot be proposed as a magnanimous effort for change.

This is an opinion and does not reflect the views of The Tulane Hullabaloo. Jonathan is a sophomore at Newcomb-Tulane College. He can be reached at [email protected]