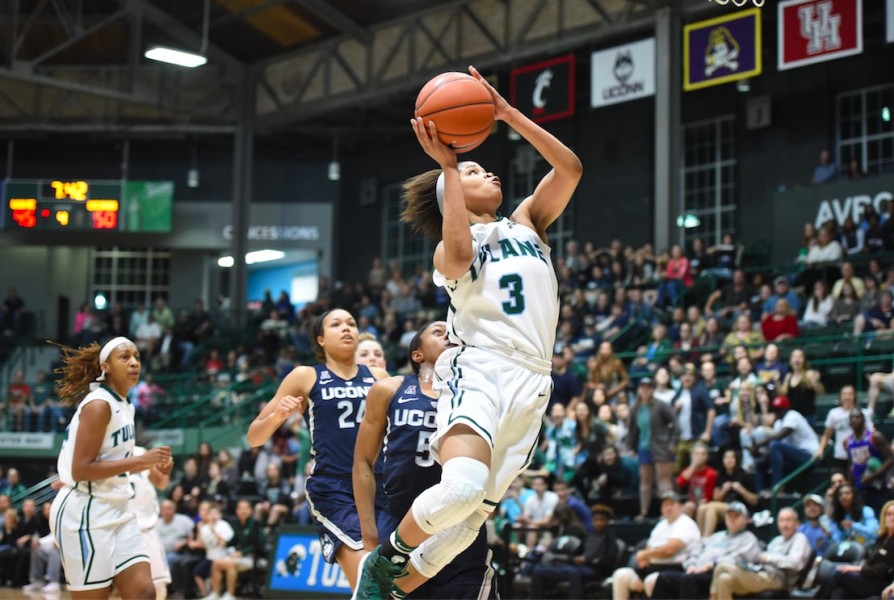 Senior guard Kolby Morgan heads up for a layup in a game against UConn last season.

Tulane’s Women’s Basketball Team has not had a losing season since 2004. With this kind of stability in a program, it is hard to doubt head coach Lisa Stockton when she speaks with confidence about her players. After all, she has been the head coach for 24 years.

Stockton’s experience with Tulane basketball includes 18 postseason appearances, 11 in the NCAA tournament. Last year, however, the team went to the National Invitational Tournament, where it advanced to the quarterfinals before losing to Alabama. After two consecutive seasons of NIT appearances, this year’s team is hoping to reach the next level. With the team resuming on-court practices this past week, Stockton has had a chance to see how ready her players are to take this step.

“Our intensity and our energy is really good. We’re more athletic this year. Some of it’s just the work they’ve done over the summer, but with the players coming in we’ve added some athleticism, and we’ve added some size … these are things I think we can build on,” Stockton said.

Stockton is not the only thing that has been consistent in Tulane’s program in recent years. Entering her senior season, guard Kolby Morgan has averaged double-digit points every year since she arrived at Tulane. Last season Morgan led the Wave in both scoring and rebounding, and she is prepared to continue to lead her team, on and off the court.

“I don’t feel pressure. I’ve kind of gotten used to being that leader, being that role model for my teammates … Coach kind of prepared me throughout my years here for that leadership role,” Morgan said.

As with every season, experienced players like Morgan are joined by a wave of new freshman recruits, hoping to find their places on the Green Wave roster. These players will be expected to fill the shoes of graduated seniors Leslie Vorpahl, who led the team in assists last season, and Courtney Latham, the team’s third-leading scorer from the season.

“I think they’re doing great. They’ve come in, they’ve meshed with the upperclassmen real well … I think all of them are really determined to try and get on the court this year,” Stockton said of the freshmen players.

The team has been on campus since the beginning of the summer to work in the weight room. With on-court practices now begun, the team is getting a chance to find its footing and discover its strengths.

“On the perimeter we’re really long, in the post we’re strong. We have a good sense of when to get each other the ball. Those areas are strengths … for weakness … I can’t tell you the weaknesses,” Morgan said.

Tulane will open its season with an exhibition game against Loyola University New Orleans on Nov. 2, followed by a tournament in Maine the following week. Hoping to do more than just build on its streak of winning seasons, the Green Wave carries a history of success on its back, a history it hopes will only grow this season.