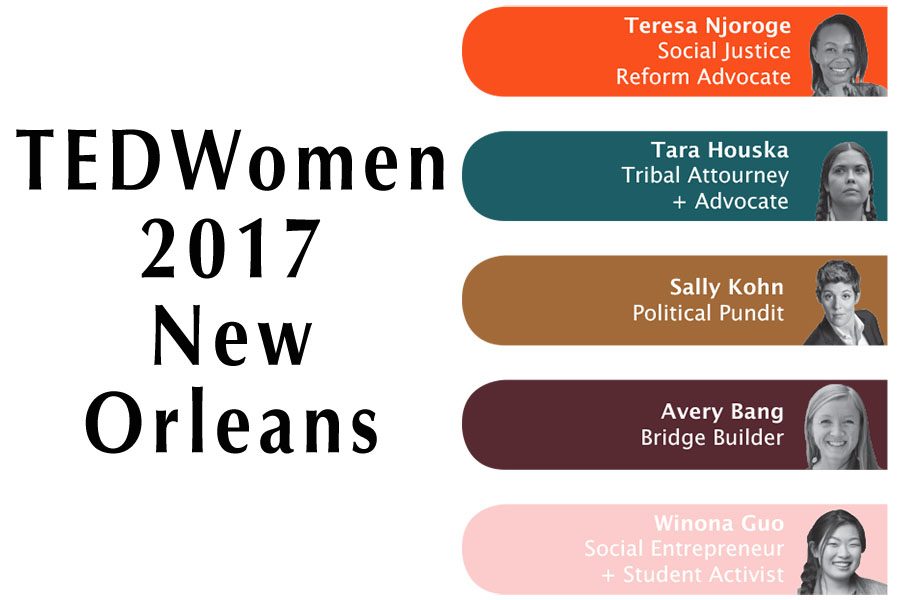 TEDTalks’ women-centered conference, TEDWomen, is on its way to New Orleans, bringing speakers from around the globe to discuss this year’s theme: Bridges.

TED Talks are known globally for presenting 18 powerful minutes of conversation-sparking discussion. TEDWomen, first established in 2010, is a female-focused type of TED conference. And this year, for the very first time, it will be coming to New Orleans.

Over the course of three days, running Nov. 1-3, incredible speakers from various countries and backgrounds will lead discussions on global issues, many of which will pertain to womanhood. The theme “Bridges” will permeate each talk, connecting people while representing more than two dozen countries and their extraordinary ideas.

“We’re doing a lot of talk about the need for bridges these days,” TEDWomen curator Pat Mitchell said. “Bridges between people, communities, races, gender, countries. There’s a lot of disconnect in the world today … ‘Bridges’ is a narrative that runs through and connects the [TED Talks] to a general idea.”

TEDWomen 2017: Bridges has six sessions — Build, Design, Connect, Suspend, Burn and Rebuild. Each session features a lineup of speakers, each of whom will give an 18-minute TED Talk. Speakers such as neuroscientist Wendy Suzuki, tribal attorney Tara Houska, poet Felice Belle and several more (including actual bridge builder Avery Bang) will gather at the Orpheum Theater starting next Friday.

After holding the previous TEDWomen conferences in Washington, D.C., New York City, Monterey, California and San Francisco, the TED team decided it was time to move the conference to the South. According to Mitchell, “There’s so much in the culture here … When you think about culture, design, music, food, great city, resilient community, you think New Orleans, right?”

Right. New Orleans is a cultural hub, and those fortunate enough to attend this year’s conference will get a chance to experience the scholastic charm of TED and the magic of New Orleans simultaneously.

There is, however, an application process and a steep price of $2,500 for TEDWomen membership per attendee. Moreover, TEDWomen is typically inaccessible to the majority of people. The reason behind the high cost of the conference is due to TEDWomen’s donations to a series of goal-driven initiatives across the globe.

To make the conference more accessible, TEDWomen livestreams each session to satellite locations in more than 150 countries and 500 cities in the U.S. Each location hosts a local TEDxWomen conference, an offshoot of the main convention. The TEDxWomen conferences are much less expensive and sometimes free depending on the location, with attendees from the surrounding community.

Tulane actually has its own satellite of TED, called TEDxTU, organized by the current student-run organization and sponsored by the Center for Engaged Learning and Teaching (CELT). Though it is not TEDxWomen, it is similar in that TEDxTU is also a localized branch of the flagship conference.

Mitchell said TEDWomen would like to expand its audience to the younger demographic. In fact, it has begun doing so by providing comped membership to select high school and college students and providing them with the opportunity to engage in workshops, discussions and other change-making events.

“It’s a worthwhile experience for anyone because it’s not just about the speakers, but it’s about the networking and getting to know this amazing community of women and men from all over the world,” Mitchell said.