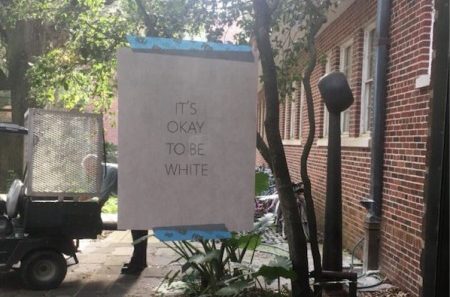 Signs were found posted on Tulane's campus Wednesday morning, as well as in Boston, Alberta, and Rocky River.

Signs reading “It’s okay to be white” found on Tulane’s campus this morning are similar to those found in Cambridge, Massachusetts; Rocky River, Ohio; and at the University of Alberta.

A thread on 4chan posted Tuesday afternoon outlines a plan to distribute and publicly post signs reading “It’s okay to be white.” The thread asks that participants post the signs on Halloween while wearing costumes to maintain anonymity.

The goal of the forum’s plan is to prompt media coverage, with the hope that any negative coverage will result in “normies realize that leftists & journalists hate white people.” The thread is tagged “/pol/”, or “politically incorrect.”

The seventh and final step of the thread reads, “credibility of far left campuses and media gets nuked, massive victory for the right in the culture war, many more /ourguys/ spawned overnight.”

On Monday, an “It’s okay to be white” sign was found posted to the door of the Native Studies building of the University of Alberta, in Edmonton, Alberta, Canada. The day before, a racist jack-o-lantern wearing a mock headdress was left outside the building. Several other posters with the same message were found on the Canadian campus Monday morning.

The 4chan thread “IT’S OKAY TO BE WHITE ORIGINAL” was posted Tuesday afternoon.

Toronto’s Metro News reports that the university’s President David Turpin released a statement on Tuesday that “the university is aware of several incidents of racism that have occurred on north campus in recent days.”

According to Metro News, the statement was released in response to both the pumpkin and the posters.

“Messaging or displays that target or marginalize any individuals or groups will not be tolerated,” Turpin wrote. “We are working with University of Alberta Protective Services to find the parties responsible.”

In Cambridge Common and Harvard Square, stickers were found posted on light poles and electrical boxes this morning with the same message at those found at Tulane. Cambridge public officials are in the process of removing the stickers, which must be scraped off with a putty knife.

Stickers saying ‘It’s okay to be white’ posted in Cambridge https://t.co/2ykdQL3aIY via @BostonGlobe

Signs reading “It’s ok to be white” were found this morning in Rocky River, Ohio, a neighborhood of Cleveland.

Sightings of the signs were also reported at Auburn University, Western Washington University, and University of Nevada-Las Vegas.

Note: An earlier version of this article incorrectly stated that the University of Alberta was located in Toronto, Canada. It is located in Edmonton, Alberta, Canada.