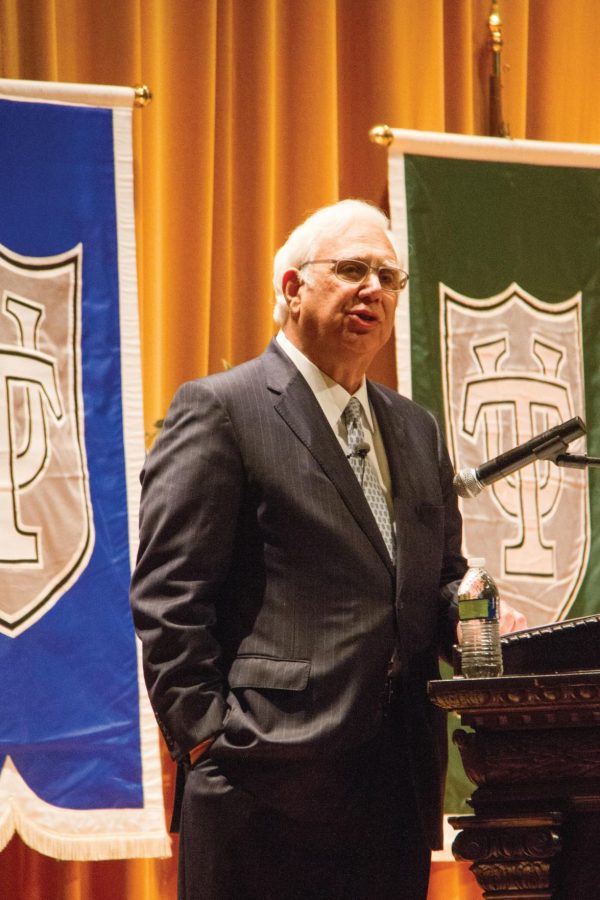 The Tulane Mortar Board invited Tulane President Scott Cowen to speak Wednesday at its annual “Last Lecture,” an event in which guests are asked to speak to the audience as if it were their last time.

Cowen decided to focus on the defining moments in his life and how they led him to pursue his passions. More than 450 people gathered to hear Cowen’s lecture, where he also discussed his 16 years of service at Tulane.

“Unfortunately for me, my lecture is about me, and a subject that I never liked to talk about, especially in public, and that is my feelings, my reflections and my introspections of 67 years on this earth,” Cowen said.

Cowen spoke from the heart, giving the audience a glimpse into what he considers his most influential experiences. Fighting through tears, he recounted the struggles that have shaped him into the person he is today. As a child, Cowen encountered difficulty in school because of an undiagnosed intellectual disability, later identified as dyslexia. Cowen said he had trouble socializing with others even on a basic level.

“When I was three years old, my parents discovered that I had a hard time getting words out of my mouth,” Cowen said. “They thought … I was [just] still young and had not advanced. When I was five years old, they noticed the same characteristic – my inability to communicate with anyone in any coherent way.”

Cowen went on to recount his experience in the military and as president following Hurricane Katrina. When he saw the devastation after the storm on television, he was brought to tears and unsure of Tulane’s future. Cowen said he looked to his wife for support.

“I said to her, ‘I’m going to fail. I’m not going to be able to do what has to be done. First of all, I don’t know what to do. And even if I did know what to do, I’m not sure we could pull it off,'” Cowen said. “All my life, this university’s been in existence, for 175 years, and I will have let it down. Marjorie said to me, ‘What have you done in the past at times like this where you have been overwhelmed, where you have been immobilized?” And I said, ‘The only thing I’ve ever done is to sit down and make lists.’ And she said to me ‘Well, you better start making lists.'”

Cowen said how people deal with defining moments determines their ability to succeed.

“I can tell you with almost perfect knowledge [whether] someone will be successful or not because how one confronts those defining moments and overcomes them and uses them really defines who they are,” Cowen said.

Cowen also touched on other aspects of his life, such as leadership and the pursuit of his passions. He advised students to tackle issues important to them, both personally and professionally.

“One of my main goals for the last 20 years [was] to have a joyful life, to have a happy life, to have a life where you have satisfaction,” Cowen said. “You have to pursue your passion. You have to find something to do in life that makes you get up every single morning and you can’t wait until you do it.”

Cowen addressed the audience with pride for the institution, thanking them for the dedication and loyalty the Tulane community continues to show him. Cowen closed his speech by congratulating Tulane for being a community that continues to persevere despite any hardships.

“If universities were to be ranked by the quality, character and values of the people of that community, Tulane would be number one in the galaxy,” Cowen said. “Once you demonstrate after Katrina what you’ve demonstrated today – resilience, grit, determination, the unwillingness to fail – it says to me there is no other university, no other community that is better than our sacred and beloved Tulane University.”