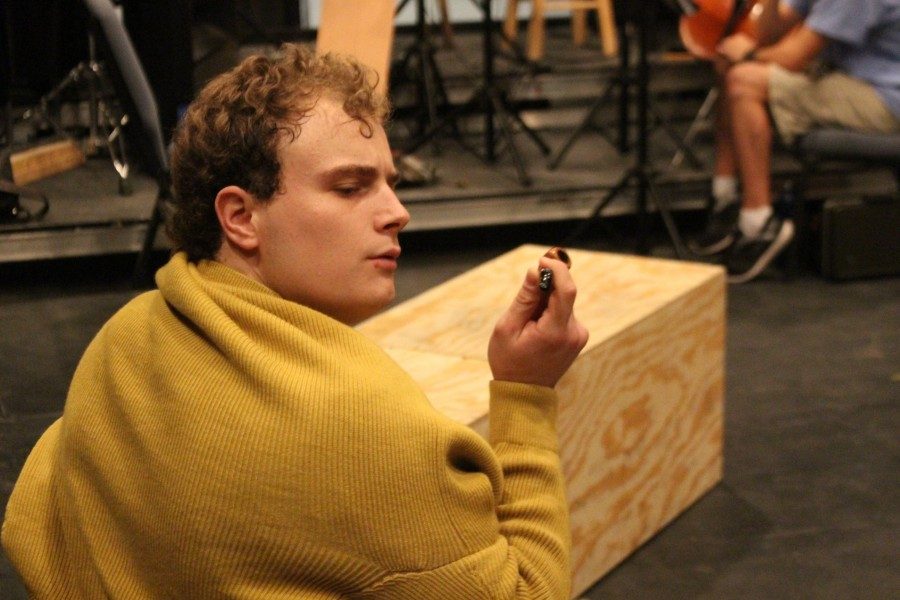 Students play multiple characters in this multi-faceted gangster drama. The show is also accompanied by a live band.

“The Resistible Rise of Arturo Ui” is truly a production in the full sense of the word.

With a cast 16-strong, a live band performing a full original musical score and a script full of audience participation, “Arturo Ui” is a robust theatrical experience.

On Tuesday, Nov. 14, Tulane’s Theatre and Dance Department will bring this show to the stage under the direction of Aimée Hayes, producing artistic director at New Orleans’ own Southern Rep Theatre.

A sizable project in many respects, “Arturo Ui” required an equally large team to ensure its seamless execution. From freshmen to graduate students and beyond, dozens of people pitched in to fill roles as cast members, set builders, musicians and more, according to senior Tirol Palmer, who plays the titular mobster.

“There’s a huge team, in fact, probably the biggest team I’ve ever worked with doing shows here … so everyone is coming together for this show,” Palmer said. “I mean, we have professors in the show, which is so cool.”

Written in 1941 by German playwright Bertolt Brecht, “Arturo Ui” follows gangster Arturo Ui’s rise through the ranks of urban 1930’s Chicago, which he eventually dominates by means of “guile, wiles, and a whole lot of muscle and guns.”

An allegory for and commentary on Adolf Hitler’s journey to power, the play is modeled around real life events, with each character in Ui’s story corresponding to an aspect of Hitler’s.

For example, one of several characters Kimble plays is Betty Dullfeet, who is meant to personify the people of Austria. Other characters more directly parallel actual figures from Nazi Germany, like a character named Givola, who represents Dr. Paul Joseph Goebbels, Hitler’s minister of propaganda.

Through its use of dark satire, “Arturo Ui” is meant to challenge audience members to think critically about fascism and figures in power, but, according to Kimble, audience engagement in this process is essential.

“It’s not a story that’s centered around plot, but it’s more about getting people to think about things,” Kimble said. “But we don’t want to give it and tell it to you, we want to show you … It’s very personal.”

Along with the atypical format and thought-provoking subject matter of the play itself, this production also includes what Palmer called a “huge musical emotional element,” a complete, original score composed by Tulane music faculty member Brendan Connelly and performed by a live band.

“It’s beautiful what they’ve written,” Palmer said. “It honestly is like a movie – it’s incredible.”

For those planning to attend the performance of “The Resistible Rise of Arturo Ui” next Tuesday, Nov. 14, tickets are required and can be purchased online.

Earlier this season, the theater department staged “The Zoo Story” and “My Cup Ranneth Over.”