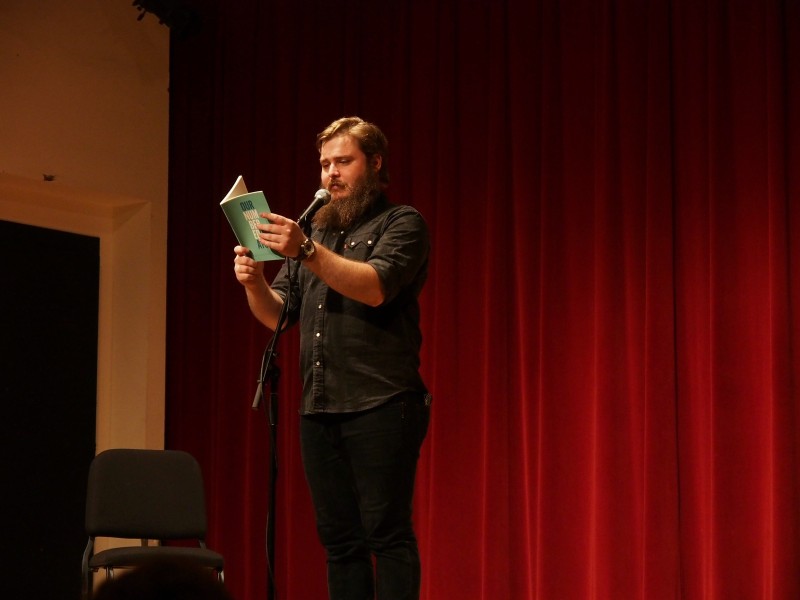 Neil Hilborn reads his poetry for the Tulane audience. The event was sponsored by NAMI-on-campus.

Acclaimed slam poet Neil Hilborn performed some of his poems for Tulane University this past Tuesday, Nov. 7 in the Dixon Hall Annex. His performance was a spectacle of tenderness, humor and genuine love of craft through poetry that should remain in the audience’s head and heart for some time to come.

Hilborn is the author of books such as “Our Numbered Days” which earned its place on Amazon’s Best Sellers list when it debuted in 2015. Hilborn came as a part of the National Alliance on Mental Illness on Campus’s workshops leading up to the Celebrate Mental Health Festival this Saturday, Nov. 11, 12-3 p.m. on the Bruff Commons quadrangle.

The performance was a full event with students all clamoring and excited to see Hilborn perform his accessible and raw poetry. Hilborn took to the stage and opened with personality and charm.

Immediately the audience laughed and seemed to also release sighs of relief as they could see that even with such a heavy topic of mental illness, there was always room for some form of levity.

“If I were someone else, I think I would still be mentally ill,” Hilborn said, reciting his poetry.

This line spoken from the poem “Clatter” was stated with firm truth and self-awareness. His words struck the audience as they nodded their heads and made reassuring expressions. Not only did the poet convey his own experiences, he also appeared to empathize with students who shared similar struggles.

Grace Hindmarch, the Workshops Chair of NAMI on Campus, has been working to get Hilborn to perform for Tulane students.

“We want and hope this starts a discussion after the performance,” Hindmarch said. “The point of workshops was to have fun, empowering and creative outlets.”

Her hopes were realized by the bulk of the audience standing outside to meet Hilborn while discussing how impactful the performance had been for them, one of them, sophomore Reagan George.

“I was really excited that this happened because spoken word is such a wonderful outlet, and I haven’t been exposing myself to it lately,” George said.

Spoken word poetry has been a rising medium of creative expression for millennials, with more and more people sharing their poetry and emotions through inspired means.

Raw honesty was accomplished and could be seen in many of the poems and lines from Hilborn’s set.

With lines like, “I think that the genes for being an artist and mentally ill aren’t just related, they are the same gene” from his poem “Joey” or “There are days where I cannot find the sun even though it’s right outside my goddamn window,” from “The World Is Not Ending,” Hilborn conveyed the kind of thought-provoking emotion that makes poetry so accessible.

Each line spoke volumes about the very real issue of mental illness while simultaneously reaching out a hand to those who experience mental illness.