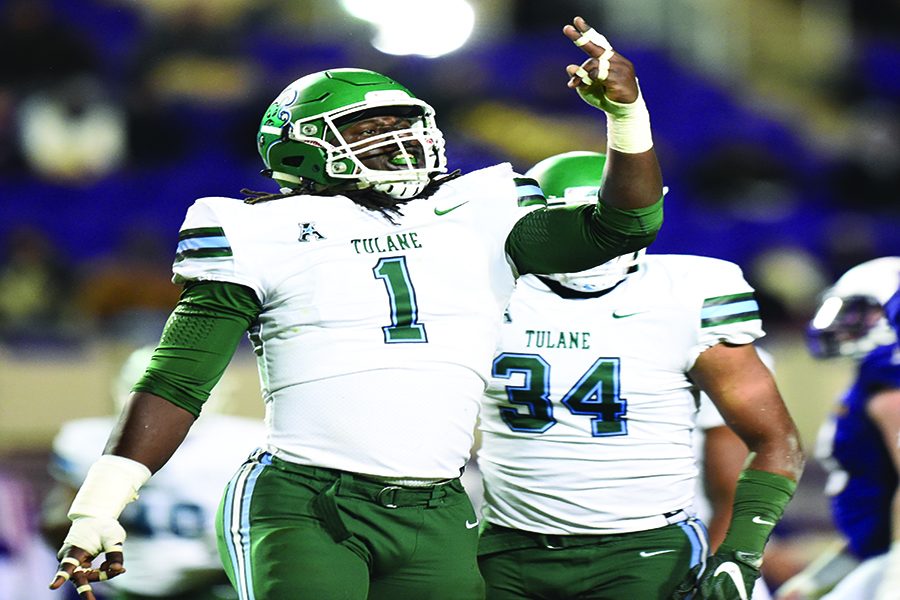 Tulane football had not played an overtime game since the Green Wave’s 2016 four-overtime win against the University of Louisiana at Lafayette last season. On Saturday, Tulane (4-6, 2-4 American Athletic Conference) emerged victorious in a 31-24 overtime win against East Carolina (2-8, 1-5 AAC) at Dowdy-Ficklen Stadium in Greenville, North Carolina.
With this win, the Green Wave snapped its four-game skid dating back to Oct. 14. It faced an ECU team that was coming off a loss of its own, having fallen 52-27 against conference foe Houston (6-3, 4-2 AAC).

Until the first half came to a close, the Wave and the Pirates were trading blows with no team gaining a distinct advantage. Two Tulane rushing touchdowns, including a 60-yard score from senior running back Dontrell Hilliard with 8:49 to play in the second quarter, were both answered by ECU touchdowns. Tulane ended the half with a 26-yard field goal from sophomore kicker Merek Glover as time wound down, and the Wave entered the locker room with a 17-14 lead.

Banks takes a knee, and we have free football#RollWave pic.twitter.com/uwwIWqktug

The second half continued with neither team gaining a large lead over the other. After trading interceptions and punts, the Green Wave extended its lead to 24-14 after a 26-yard Hilliard run. Two Wave turnovers in the second half, however, aided the Pirates in the comeback effort as ECU initiated the rally following a field goal to cut the score to 24-17. With only 40 seconds remaining in regulation, a nine-yard touchdown pass from junior ECU quarterback Gardner Minshew to sophomore wide receiver Deondre Farrier tied the game at 24, and the Green Wave entered overtime for the first time this season.

As overtime commenced, Tulane faced a fourth-and-one from the ECU 16-yard line. Head coach Willie Fritz elected to go for the first down, and junior quarterback Jonathan Banks responded by running down the left sideline for a 16-yard score, taking a 31-24 lead.

ECU took over with the chance to score and send the game into double overtime. On the three-yard line, with four downs for ECU to make it into the end zone, the Tulane defense held strong thanks to a pair of stops by senior linebacker Rae Juan Marbley. On fourth-and-one, ECU attempted to rush up the middle and was stuffed by redshirt junior defensive end Robert Kennedy, sealing a Tulane win.

On a night when Tulane’s passing yards barely exceeded 100, the Green Wave found offensive strength in the running game. Hilliard led the charge with career highs in both yards and carries, taking the ball a total of 189 yards on 28 carries and scoring two touchdowns. This was Hilliard’s fourth time breaking 100 rushing yards this season. Banks, throwing 11 of 19 for 110 yards and one interception, also contributed to the rushing game with 96 yards and the remaining two regulation touchdowns. Overall, Tulane had 446 total offensive yards on the game.

Defensively, the Wave gave a strong performance to help its offense keep the lead. The Green Wave defense made several key stops during regulation on its way to the victory, aided by Marbley’s team-leading seven solo tackles. Redshirt senior cornerback Parry Nickerson notched his 14th career interception during the game, and the defense made several key stops against the ECU offense to turn the ball over on downs, including one at the Tulane five-yard line on a pass defended by junior free safety Taris Shenall to prevent a potentially fatal touchdown for the Wave.

Tulane will have its Senior Day during its final home game of the 2017-18 season against the Houston Cougars at 3 p.m. on Nov. 18 at Benson Field in Yulman Stadium.