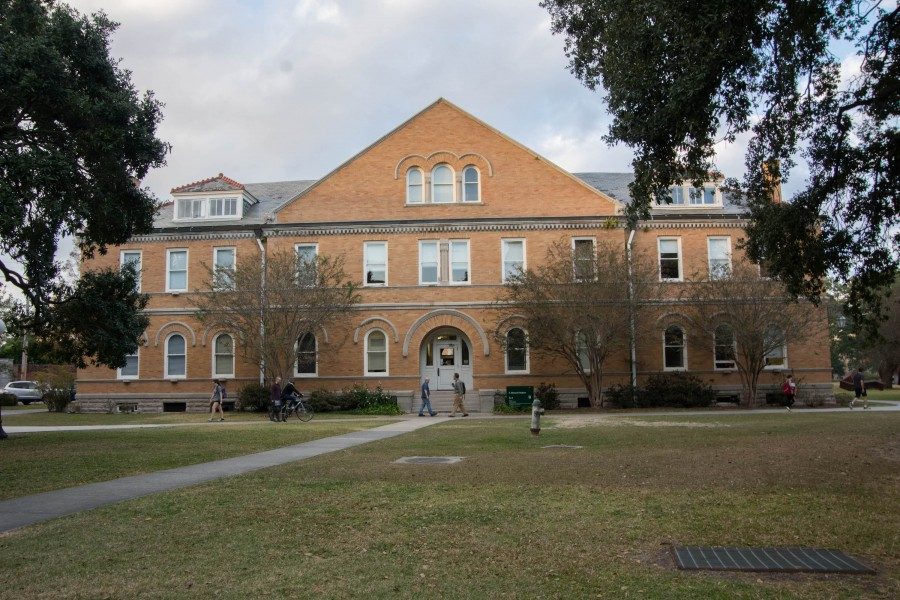 The building, which currently houses the Africana Studies Department, Center for Academic Equity and History Department, was named after Tulane Class of 1924 alum F. Edward Hebert.

Hebert went on to have the longest-serving term in the U.S. House of Representatives out of any Louisiana representative. Of much more concern to the authors of last night’s legislation, however, were the racist and anti-integration platforms on which Hebert ran.

A self-identified supporter of the “war against Civil Rights,” Hebert contributed to the language of, and strongly advocated for, the Southern Manifesto. This manifesto is the single largest piece of legislation in opposition to Brown v. Board of Education, which established the unconstitutionality of segregation in 1954.

“What is most jarring about the building and its namesake is the positioning of three of the many departments in that building: the Africana Studies Department, Center for Academic Equity and History Department,” Shahamat Uddin, co-author of the legislation and USG senator, said. “What does it say about what side of history Tulane is on when its History Department is housed in a building named after a segregationist?”

The 20th senate of USG passed the legislation at the eighth session Tuesday night at Kendall Cram in the Lavin-Bernick Center for University Life. Approval of the resolution does not immediately rename the building but instead calls upon the administration to rename it.

The resolution will next be brought to Tulane’s Graduate and Professional Student Association then the University Senate. Ultimately, a USG Ad-Hoc Committee will present a proposal to the Tulane Board of Administrators, who will make a decision regarding the proposed renaming.

For the building’s new name, the legislation suggests Guillory and Elloie Hall in recognition of the efforts of two black women, Barbara Marie Guillory and Pearlie Hardin Elloie, who were the first two students of color at Tulane University. Their attendance was largely contested until they defeated the administration and successfully integrated Tulane in 1965.

Sonali Chadha, co-author of the legislation and USG Diversity and Inclusive Excellence chair, said she and co-authors and senators Juharah Worku and Uddin think it is important to rename Hebert Hall because “it perpetuates a culture of white supremacy on campus.”

During Senate, the authors cited other buildings on campus, including Gibson Hall, as perpetuating white supremacy. The building was named after Randall Lee Gibson, a Confederate general.

All of which is laughable at a university named Tulane.

“There have been talks about pushing efforts toward other Tulane dedications and namesakes … but at this moment we are dedicated towards the task of removing the name of F. Edward Hebert before moving on to other endeavors,” Uddin said.

The legislation cited the decisions of peer institutions to rename buildings memorializing slavery and the Confederacy as well as the Take ‘Em Down Nola movement. Duke, Georgetown, Rutgers and Princeton have recently renamed campus buildings that commemorated Confederate or slaveholding individuals.

“We also acknowledge we are opening a can of worms when it comes to buildings named after white supremacists,” Chadha said. “We are here to begin and follow through on that fight to removing the names of controversial and oppressive figures on this campus …”

By passing the resolution to rename Hebert Hall, USG called upon the university to join these movements in renaming, if not rewriting, the university’s history. Chadha, Uddin and Worku wrote and are distributing a letter calling upon the Board of Administrators to take action.

“The Tulane administration talks much about their efforts to diversify campus and make it a more inclusive climate for marginalized students, and we felt this was a tangible way to demonstrate intolerance for a white supremacist campus,” Chadha said.

For Uddin, the opportunity to rename campus buildings inspired him in part to run for USG Senate after he attended one of Students Organizing Against Racism’s Tours of Truth.

“The authorship process in itself was very empowering because the fight for diversity and against racism can feel endless and hopeless without easily seeing tangible impact,” Uddin said. “In writing this legislation, we foresaw a future where our actions could make tangible impact and that was definitely motivation and a driving factor in our efforts.”