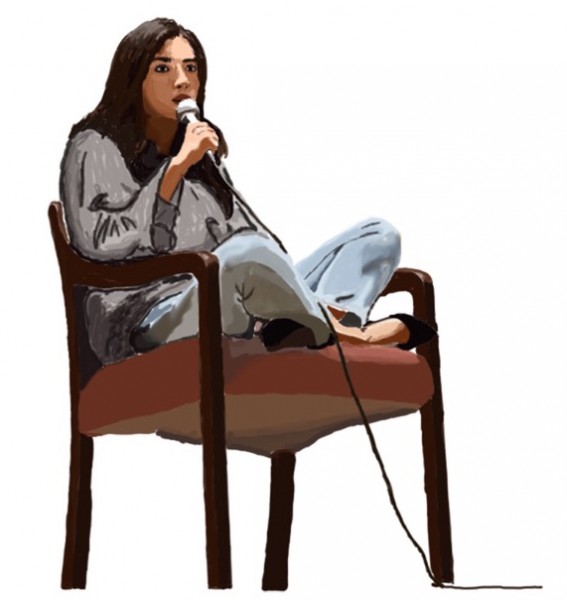 “I kind of understood that I had a responsibility with my storytelling,” actress Diane Guerrero said. “In order for any of this to be worth it or for any of this to feel good, I had to tell stories.” Guerrero reflected on being a child of undocumented immigrants Monday in Tulane University’s McAlister Auditorium.

Guerrero is an American actress best known for her roles in “Orange is the New Black” and “Jane the Virgin.” In addition to acting, Guerrero has written a memoir of her experience after her parents’ deportation to Colombia and works as an activist for immigration and naturalization.

“I was excited to see Diane, not only because I love her as an actress, but also because I know that she is an advocate for several important causes, many of those pertaining to the Latinx community,” freshman student and GENTE member Juan Olarte-Cortés said.

In her role in “Orange is the New Black,” a show looking into the life of female inmates in prison, she is part of a large group of latina women. In “Jane the Virgin,” the predominantly Latinx cast challenges the white-dominated narratives that tend to exist in mainstream American television.

“It really affects a child when they grow up watching television and they don’t see any characters who look like them or stories they can relate to,” Olarte-Cortés said. “They start to believe that maybe their stories or the communities they belong to aren’t important, and that’s something that isn’t true.”

At the Tulane University Campus Programming-sponsored event Monday night, Guerrero provided her perspective on what it is like to grow up as the child of two undocumented parents. Though citizens themselves, these children of undocumented parents are still not safe from the challenges that come with undocumented status.

“As a kid I was very aware of my parents’ status and sort of always lived in fear of what might happen,” Guerrero said. “My parents tried to legalize their status with different programs or with different lawyers, sending in paperwork … and they failed each time.”

Guerrero’s talk comes at an especially pertinent time in the current political climate. With President Trump’s repeal of Defend Action for Childhood Arrivals, or DACA, tension and stress have increased, particularly for students affected by their immigration status or the statuses of their family members.

Connecting her own experiences with the larger theme of immigration, Guerrero spoke on her struggles with education after the deportation of her parents when she was 14. She had to decide whether to stay alone in the U.S., the place where she had lived her entire life, or go with them to Colombia.

“I wanted to go to school, I wanted to continue my studies,” Guerrero said. “I didn’t know how I would do that if I had to go to this country that I had never been to.”

Guerrero also touched on the often neglected detriments to mental health that can come with struggles related to immigration status.

“I grew up with a lot of anxiety and just a lot of fear,” Guerrero said. “As a kid, your parents are telling you that you can’t share your life with anybody for fear for someone to come and separate your family. That’s a lot on a five-year-old. It can really kinda mess you up.”

According to a study from UCLA, 36.7 percent of women-identified undocumented students reported a level of anxiety that is above the cutoff line for anxiety disorder, four times what is reported by the general population. A case study in Texas showed that children of undocumented immigrants experience elevated anxiety in addition to a higher risk of depression if their parents are detained or deported. Families of mixed status also report having worse physical health for their children.

With regard to mental health services for the community of undocumented students at Tulane, students face a multitude of systemic, institutional and mental barriers. Nicole Caridad Ralston, program manager for community service programs in the Center for Public Service, has worked with various subcommittees and other offices to provide resources.

“Outside of CAPS, which I do think is a good resource … in the community, Catholic Charities does a lot of free counseling for undocumented immigrants in town, so that would be a good resource as well,” Ralston said.

Guerrero gave advice to college students dealing with similar issues and shared how she was able to work through the challenges she faced.

“I went to school with mostly white kids, Guerrero said. “I’m an American girl, and I was feeling like an outsider on both ends … I wanted more than ever to close that gap, and I wanted to make sure that my experiences were shared.”