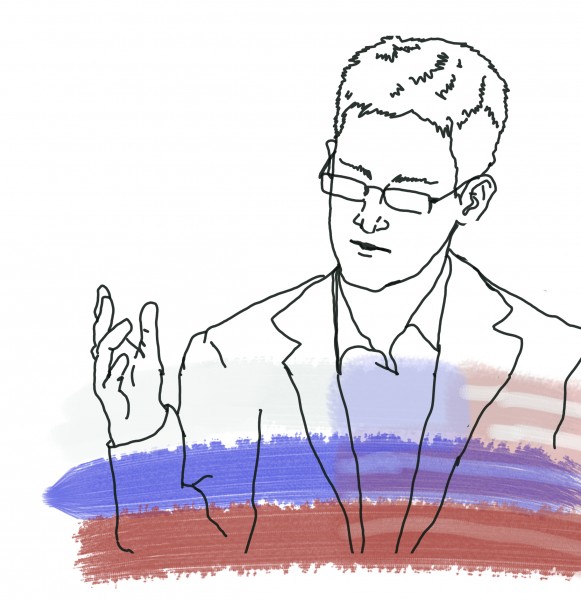 “What is better for the world? A comfortable lie or an essential truth?”

This question, posed by Edward Snowden from his apartment in Moscow to the audience gathered in McAlister Auditorium, set the tone for the discussion that took place Monday night.

Snowden was invited to speak by Tulane University Campus Programming, but the criminal charges against Snowden prevent him from entering the country, so the discussion was presented via video chat. Doors to the event opened at 6:00 p.m. and the line of people soon spanned the Lavin-Bernick Center for University Life Quadrangle. Ron Suskind, Pulitzer Prize-winning journalist and writer, moderated the discussion and helped to create a comfortable, relaxed environment for the event.

The talk was centered on politics and Snowden’s political crime, and Snowden delved into his personal journey and the motivation behind his life-changing decision. His story began with him enlisting in the Army, joining at a time when there were protests against the Iraq war, and eventually working NSA and gaining access to national intelligence. While working at the Hawaii Cryptologic Center, he discovered a secret.

Snowden was faced with the dilemma of what to do with this secret. Not only did he sign a non-disclosure agreement, but he had also taken an oath of service to uphold the Constitution. He knew speaking up about the information he discovered within the prescribed channels would not change anything about the program, only get him fired. Though Snowden spent his whole life advancing government interests, he was unsure of what to do until a pivotal moment.

“The most important moments in our lives are when we change our minds,” Snowden said.

The discussion was laced with statements encouraging people to realize their civic duties and the role they play in our democracy. The audience seemed to be in support of Snowden’s motivation to protect our right to do so, giving him a standing ovation at the end of the discussion.

“He seemed like a smart and passionate guy who faced a moral dilemma and, in the end, did what he thought was the right thing,” sophomore Joseph Sotile said. “I didn’t have a negative perception of him to begin with, but he did a really good job of defending his actions and justifying them on the basis of his perception of our country’s principles and his own morals.”

Other students said they believed the event contributed to the conversation on campus surrounding diversity of political thought.

“The discussion played into a larger debate happening around campus and around the country. When is it acceptable to break the rules or the law for something you believe in?” junior Justin Wisnicki said. “No matter what you do in life, dealing with injustice will be something everyone will face.”

Snowden’s actions led to the passage of the Freedom Act, which ended the surveillance program. It has also brought attention to the Espionage Act, which does not distinguish between spies and whistleblowers. Because of a provision in the act, Snowden’s motivation to promote the public interest could not be a consideration if he is tried.

Though Snowden knows he is likely to be in exile for the foreseeable future, he is not without hope. The discussion ended with Snowden establishing his pride in having opened a dialogue about surveillance and the power of the people in relation to the government. In recent years, there has been a fine line between adequately serving the national security of the people and violating their Constitutional rights. In an age of such technological advancement, this line can often be blurred.

“Me speaking scares people who deserve to be scared,” said Snowden.