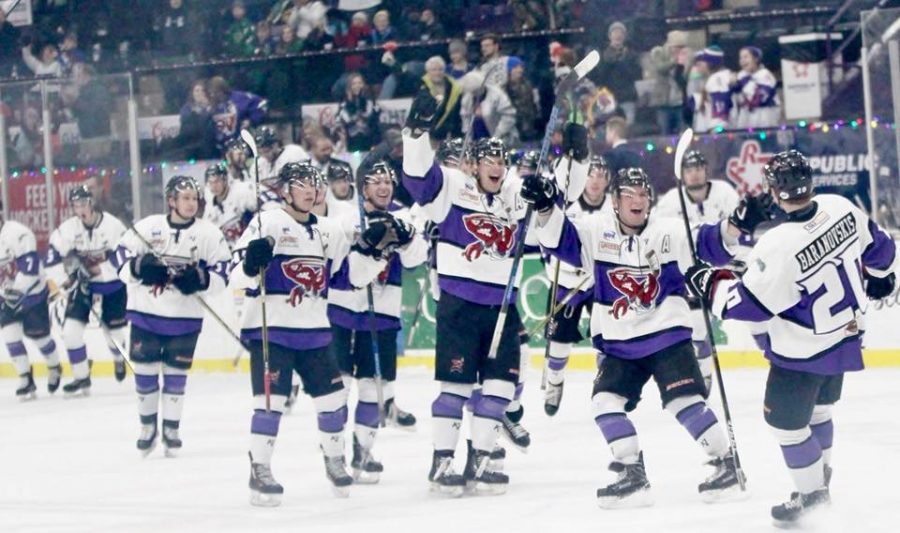 Shreveport Mudbugs celebrate a victory. The team has now qualified for the playoffs for the second year in a row.

Two decades ago, ice hockey in the American South was considered a joke. Even the 1999 Stanley Cup victory by the Dallas Stars did little to change northern U.S. and Canadian attitudes about southern teams.

The relocation of the Atlanta Thrashers in 2011 to Winnipeg, Manitoba, was seen by Canadians as a victory and a return of hockey to its roots. With the Nashville Predators clinching the Western Conference Champion title last year and Tampa Bay’s huge success this season, however, hockey in the South has become a force that neither the National Hockey League nor hockey fans can ignore.

The Tampa Bay Lightning currently lead the Atlantic division and the NHL in both game wins and game points. According to many hockey strategists, Tampa Bay currently has the best odds at the 2018 Stanley Cup win. Its local fan base is considered one of the strongest in the league.

“Everyone in my hometown was invested in hockey because it was the only team we had that was half-decent,” Riley Moran, a Tulane freshman and Tampa Bay native, said. “The games are fun, and people tend to flock to them as a sort of social event or place of entertainment.”

So where does Louisiana fit into the rise of southern hockey? Louisiana has never been home to an NHL team, and no college in Louisiana has a Division I ice hockey team. The Louisiana Icegators, a former Southern Professional Hockey League franchise, suspended play indefinitely in 2016 and have yet to make a comeback. It seems hard to believe that hockey could ever become a major sport in the area, especially to the degree it has in Florida.

“It costs too much money,” freshman Samuel Bruchhaus, originally from Lake Charles, Louisiana, said.  “The reason that football, basketball and baseball are so successful is because, in its purest form, it has very little expense. Thus, kids can play in their backyards and then go watch their teams do similar stuff. Florida also has a large population of people that have moved from the north, which Louisiana doesn’t have.”

In a surprising turn, however, junior hockey has thrived in the state. The Shreveport Mudbugs, Louisiana’s only junior ice hockey team, celebrated their 20th anniversary last year and just clinched a spot in the North American Hockey League playoffs for the second year in a row.

“They just quickly latched onto the unique nature of the sport, and since the sport has a differently timed season than the other sports out there, we were in a unique position,” Mudbugs Media Director Eric Tuxen said. “We have a very loyal fan base here and have for quite a long time.”

Despite their best efforts through open tryouts and camps, the Mudbugs have yet to pull a local player into their ranks. The lack of youth hockey in the area leaves little opportunity for local players to emerge. A local fanbase is one thing, but a statewide presence is quite another.

Louisiana does not have the typical markers for an NHL stronghold. Then again, neither did Florida or Tennessee. It remains to be seen whether professional hockey will ever be able to exist sustainably within this state the way it has in other parts of the South, but the Mudbugs prove that ice hockey in Louisiana isn’t just a pipe dream.