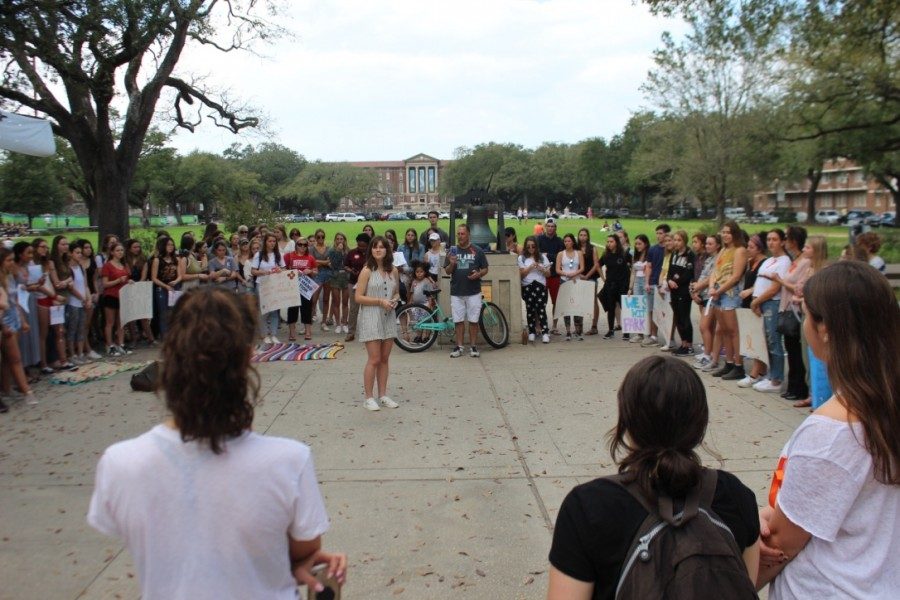 Students gather in front of McAlister Auditorium for a vigil and protest. The event was two days after the shooting and was organized via Facebook.

Many Americans are all too familiar with the mass shooting cycle: public outrage, political inaction and then quiet after a few weeks. Parkland was different.

According to Vox among others, the Parkland shooting on Feb. 14 has remained on the minds of Americans and media outlets largely due to the political activity of the survivors. Young people across the country are following their lead.

Many Tulane students across the political spectrum are advocating for solutions to mass gun violence.

Students gathered to mourn the lives lost in the Parkland, FL shooting and speak about the need for progress and change. pic.twitter.com/WNXwPZDiBv

Students have sprung to direct action. Two days after the shooting, a group of sophomores put together a demonstration and vigil honoring the lives lost. The demonstrators and many of the people who gathered spoke out about the need for stricter gun laws and urged people to reach out to their local representatives.

“We wanted to provide a space to give people options and ideas and talk about ways to do something and act out our feelings,” sophomore Moriah Jacobs, who helped organize the vigil, said.

The students organized the event just two days before it happened by creating a Facebook group. The event picked up traction, and gun control advocacy group Moms Demand Action reached out and asked to come to the demonstration.

“It was really special to have them there, and they were really able to help us put our feelings into action and help us to know exactly what to do, like calling your representatives, which really does make a difference,” sophomore Ilana Seidl said.

Gun Violence Information Meeting:
Learn what you can do to make change and prevent future gun deaths in the United States.
Tuesday, March 6, at Rogers Memorial Chapel at 5:30 pm pic.twitter.com/VQwSmmSwTy

Political Science Professor Geoffrey Dancy has worked with Moms Demand Action on and off Tulane’s campus.

“They just brought me in because I do a little bit of research about the way that we think of gun rights in the United States and then also on gun policies at the state level,” Dancy said. “So I just help them try to understand the issue more.”

Dancy emphasized the need for organized action for true change to be seen. He also said he thinks there is not as much activism on campus as there used to be and points to social media as a likely cause of this.

“[Social media] is helpful in that it is easier to reach out to people and know that if you wanted to directly communicate with the high students from South Parkland, you could do that,” Dancy said. “But where it’s hurtful is that that often substitutes for people meeting in person and hitting the streets … The online petitions just disappear into the ether, no one really cares.”

“I think we live in a Tulane bubble right now where we don’t realize how dangerous the city really can be and the amount of lives that are lost every single day,” Solomon said. “So that really resonated home, and I was like, ‘I want to be a part of this, I want to be a part of a movement I really, really believe in.'”

During her summer internship, Solomon worked closely with victims of the Pulse Nightclub shooting and the victims’ families.

“Sometimes the movement can kind of halt when there aren’t massive shootings because people forget that that is an issue that affects millions of people every single day even when there aren’t mass shootings,” Solomon said. “So our biggest thing was reminding people, ‘You know that people are losing their lives all the time. What are we doing on a daily basis to try and stop this?'”

A Call for Dialogue

Not all students believe that advocating for more gun control is the correct response to the Parkland tragedy. Marcus Maldonado, president of Young Americans for Liberty, views mass shootings largely as a mental health crisis.

“I think that focusing on the mental health issue and focusing on other avenues before we start thinking about changing our most dear rights that we have in the Bill of Rights should be our first step,” Maldonado said.

YAL is still planning how best to engage with the issue, considering the liberal majority on campus. The group’s interest in participating in conversations about gun violence highlights the potential for fostering an open debate about these and related issues on campus, while valuing the rights and viewpoints of others.

College Republicans also wants to open a dialogue about gun violence among the various political organizations on campus. The club will be participating in a public debate in an effort to find new solutions and move forward on political advocacy.

“We offer our deepest sympathies to those affected by the shooting and to the residents of Florida,” College Republicans President Lauren Bourgeois said. “We believe this issue deserves more than a simple statement, so we invite all interested to attend the Political Debate on April 11th where College Republicans, College Democrats, Libertarians and other political groups will partner together to give their opinions on gun control and other complex issues.”

Amnesty International is hosting a gun violence prevention information meeting on March 6 at 5:30 p.m. in the Rogers Memorial Chapel. The event will feature Victoria Coy of States United to Prevent Gun Violence and Donna Dees of the Million Moms March, among others, to discuss their demands for stricter gun control.

This event is intended to help students understand how to best organize and connect them to the activist community.

“[Student protests] are really hard things to organize…what students don’t often realize is how much power they actually have,” Dancy said. “They have a tremendous amount of untapped power that just has to be realized.”