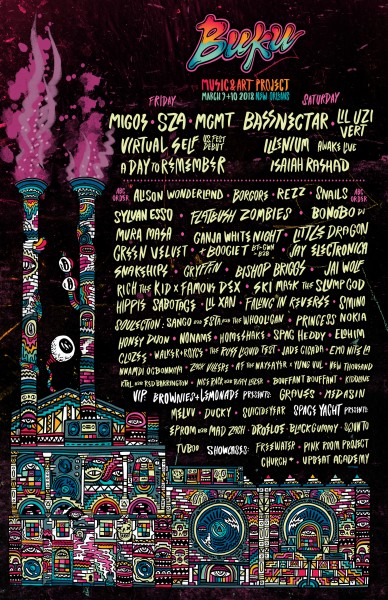 Buku Music and Art Project begins 2 p.m. Friday, March 9 in buildings across the Mississippi Riverfront and focuses on celebrating its unique BUKulture - a combination of art displays and live music.

New Orleans is a city like no other, so it’s on-brand for one of the city’s largest music festivals to offer its attendees experiences that they won’t find anywhere else. The musical performances offered are one thing – headliners like Migos, MGMT and SZA are bound to attract crowds – but the unique atmosphere of the BUKU Music and Art Project is what keeps people coming back year after year.

With many other music festivals featuring music and art that are both popular around the world and unique to the region, BUKU has set itself apart for its unique displays of local art and entertainment, including surprise “special moments” that are revealed throughout the weekend. BUKU’s unique vibe, dubbed BUKulture, is centered on its spontaneity, forcing festival-goers to keep their eyes peeled at the risk of missing a one-in-a-lifetime performance.

BUKU has been releasing several promotional videos on its Facebook page as the weeks leading to the festival dwindle into days, including a video for its famous Live Graffiti Wall. The festival’s art curator makes sure to distinguish BUKU as an art project, not an art gallery. It is in a “constant state of change,” with new installments and pop-up performances that push the envelope as they are added every year. This year’s artists include Kate Hanrahan and Art by Jay and Wooly, among others.

Perhaps the most differentiating aspect of BUKU is its location. The festival stretches across several buildings along the Mississippi Riverfront, including the Mardi Gras World warehouse, where stages are flanked by actual floats from Mardi Gras parades.

The BUKU Music and Art Project doors open at 2 p.m. this Friday, and the festival ends Saturday night. Passes for the whole weekend and for each day are available on Buku’s official website.