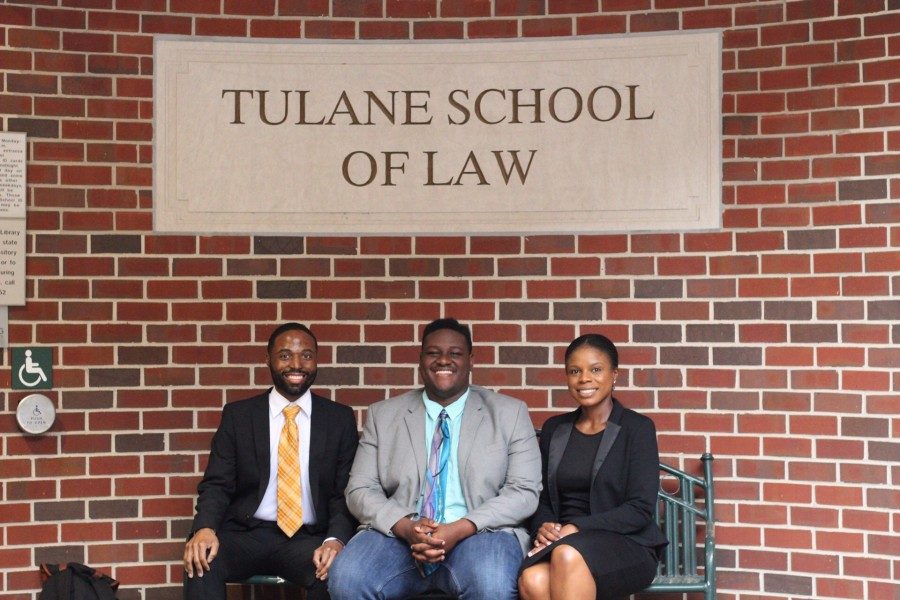 At the beginning of the 2017-18 academic year, Tulane University Law School students elected three class presidents — one to represent each of the classes at the law school. The campaign, voting and election process happens every year at Tulane and at many law schools around the country. This year, however, was different from most.

Tulane’s law school student body voted to elect Kerianne Strachan, Gerald Williams and Garrett Hines — all African-American students. As far as students and faculty at the law school are aware, this is the first time in Tulane Law history that this has happened.

Strachan, the Class of 2018 president, is also the director of the Tulane Legal Assistance Program this year and hopes to go into media and intellectual property law.

Not initially planning on running for class president, Class of 2019 President Williams was convinced when his peers told him they would vote him into office, whether he officially ran or not. He plans to go into civil rights law to be an attorney who “stand[s] up for the voiceless.”

And Hines, the Class of 2020 president and a Louisiana native, has his sights set on becoming a federal prosecutor. Though he acknowledges that being African-American and wanting to go into a field of the law that puts people in jail can sometimes earn him “side eye,” he said he thinks “… It’s important to know that if you have people who look like the folks who are getting prosecuted, it gives it a different perspective.”

Beyond the potential career paths and professional goals of these three students, their class presidencies represent what could be an important shift in the demographic makeup of law students at and beyond Tulane.

Law schools at large lack racial diversity, and those deficits get worse the further up the law school rankings you go. The Journal of Blacks in Higher Education reported in 2014 that of the nation’s top 15 law schools, none had more than nine percent African-American enrollment.

This lack of racial diversity in law schools has a profound effect on the population of practicing lawyers, 88 percent of whom were white as of 2015.

David Meyer, dean of Tulane Law School and Mitchell Franklin Professor of Law, said he believes increasing the representation of racial minorities in both the study and the field of law is “critically important.”

“The quality of education in a law school depends on a robust exchange of ideas and experiences inside and outside the classroom, and that requires having a diverse student body with wide-ranging experiences and perspectives,” Meyer said.

Who inspires us? Our #TulaneLaw students. Another nice profile of our 1L, 2L and 3L class presidents.https://t.co/4eTiWwaPzx pic.twitter.com/NFmQrTuOFu

One initiative that Tulane undertook to promote diversity in its law school was creating the position of Assistant Dean for Career Development and Diversity Initiatives. To fill this position, the law school hired Lezlie Griffin. In this role, Griffin manages multiple projects aimed at increasing minority enrollment and ensuring that current law students of color have access to supportive networks at Tulane and in the law field.

For Griffin, an African-American attorney and Tulane Law alumna, these efforts are significant both for her personally and for the communities she aims to elevate through her work.

“Many young people of color have never met a law student or lawyer that looks like them, and here at Tulane Law we are striving to change that,” Griffin said. “It’s our responsibility to get out in the community and show these students that if we did it, they can too.”

Tulane President Mike Fitts, a former dean of the University of Pennsylvania Law School who began his own career as a law clerk for a civil rights advocate and judge, said remedying the lack of racial diversity of law schools is not only important for law schools, but also integral to the realization of America’s foundational principles.

“Increasing African-American enrollment in our nation’s law schools brings the promise of improved legal education and increased access to legal services for underserved populations,” Fitts said. “It also supports the American ideal of justice for all.”

For some, like first-year law student Jackie Degann, Tulane’s initiatives and the historical election of Strachan, Williams and Hines are steps in the right direction. This is especially true because, as Degann points out, Tulane’s class presidents are elected by their peers.

According to Williams, with the creation of a diversity and inclusion committee at the law school and a number of African-American students that is growing with each new class, Tulane seems to be making strides when it comes to improving racial representation in the law school.

For others, though, there is still much work to be done when it comes to creating and maintaining a level of diversity in law that better reflects the world.

“Progress toward diversifying the legal profession has been frustratingly slow,” Meyer said. “… But achieving a truly diverse profession will require sustained efforts long before law school, in primary and high schools, to encourage more children to imagine careers in law.”

For first-year student Tanisha Manning, the election of this year’s class presidents is only a drop in the bucket when it comes to diversifying the field.

“[The election of these class presidents] might not be even moving the needle a little bit for the field, but it means something here for sure,” Manning said. “… I guess one change in one school can trickle to another change in another school. So there’s hope, I always say there’s hope.”

This year, along with the election of Strachan, Williams and Hines and the creation of Griffin’s position, Tulane hired two additional faculty members of color, and has a third offer outstanding. Griffin’s office, with the help of student committees, is also planning several events throughout the course of the semester to commemorate the 50th anniversary of Tulane Law School’s first African-American graduate Michael Starks, who graduated in 1968.

Addressing and promoting representation and inclusion within the legal field and law schools continues to be a complex puzzle for lawyers and law school administrators, and Tulane’s newest presidents and programs are only a piece of that puzzle. For Strachan and her fellow class presidents, though, progress starts with small steps, like the first election of three African-American class presidents at Tulane Law School.

“I’m hoping that somehow we’re planting a seed that will grow, and that by showing other people we’re law students who are also active in the community, that we can help increase recruitment of diverse students,” Strachan said. “… It’ll be awesome to see that because it’ll just create more of a representative dynamic in the law school when it comes to starting discussions in classrooms and beyond.”