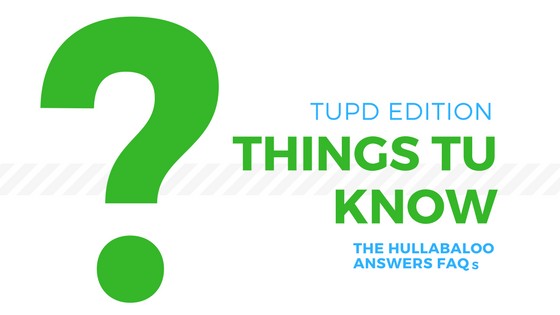 We know how hard it can be to follow the news, especially when groups use a lot of jargon that requires inside understanding. In an effort to increase accessibility to our coverage, The Hullabaloo is introducing its newest column, Things TU Know, to help keep students informed.

Tulane President Mike Fitts sent an email to students regarding a Tulane University Police Department investigation on Tuesday. The Hullabaloo spoke to some students who had some difficulty understanding some aspects of the email, and others reported ignoring it, despite the significance of its contents.

What did President Fitts’ email mean?

President Mike Fitts sent out an email on April 3 to all students, faculty and staff acknowledging an independent investigation into the Tulane University Police Department. This investigation was brought about after a number of anonymous complaints were received about inappropriate behavior.

As a result of this investigation, some members of the force have been terminated or have resigned. Tulane is beginning a nationwide search for a new permanent police superintendent.

Why were people let go? What is the investigation all about?

The investigation focuses on two incidents in which use of force was improper. One involved an off-campus call to Maple Street in which an officer tackled a victim to the ground, thinking he was a suspect. The second incident involved an officer holding a suspect by the throat. Another officer used a taser against the suspect who was kicking chairs while he was handcuffed and seated.

Some officers who were on the scene during these two incidents misfiled paperwork omitting use of force. Complaints, however, were filed by higher-ups. In the first incident, the Use of Force Review Board unanimously agreed that it was handled improperly, and in the second incident, all three commanding officers came to the same conclusion.

Bishop ordered a commander to change one of the rulings and void the other.

This information comes according to WWLTV, which released a report on the investigation after anonymous sources approached them. During the WWLTV investigation, TUPD agreed to release records after initial pressure from reporters.

Who was the improper use of force used against?

Neither of the people were Tulane affiliates. In the first incident, the officer was responding to an off-campus crime report near Tulane, and the second was at the Tulane Medical Center.

Who is running the investigation?

Can I view any files related the investigation?

TUPD considers itself a private police force that serves Tulane and is not subject public information laws. WWLTV and other groups disagree, highlighting its ability to arrest non-Tulane affiliates and its jurisdiction over a much larger area of New Orleans than just nearby campus.

What is the difference between a police chief and a police superintendent?

Jon Barnwell was the last TUPD superintendent and left Tulane last year. The Uptown and Downtown forces each have a police chief who oversees the respective forces. Bishop was the Uptown police chief.

Spelman and Johnson, an independent firm specializing in education leadership, will be conducting the search for a new permanent superintendent.