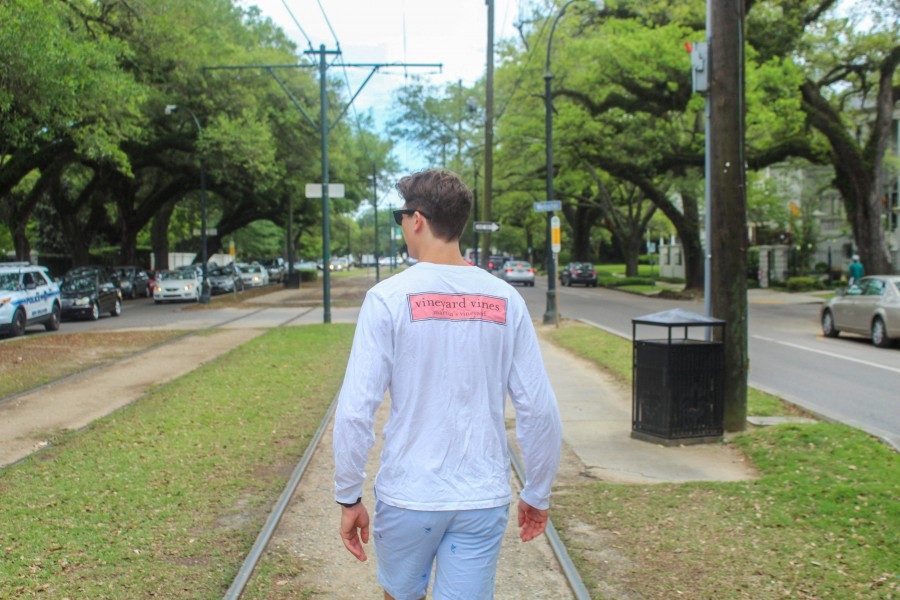 A Westchester native whiffing in the fresh dank air, getting the full New Orleans experience.

In a totally unprecedented event, a group of young male Tulane students from Westchester, New York ventured past the borders of campus for the first time since arriving at Tulane.

The idea for the trip all began when of the students found out about a sale for Supreme hoodies occurring downtown. “Bro, we just had to go, we just had to send it,” freshman Preston Waffles said.

The group decided to set out from Gibson Hall, taking their first steps across St. Charles Avenue to the streetcar stop across from campus.

Right from the start, they could sense a difference. “I have a feeling we’re not in Tulane anymore,” freshman Chase Pavements said, before clicking the heels of his off-white sneakers together three times.

After boarding the streetcar, the students settled down in their seats and began to watch out the window at the passing scenery.

“Dude, do you see that house? I think I’m going to try to get that for my off-campus housing next year. My dad said I could go for whatever,” Waffles said, pointing at one of the mansions lining St. Charles.

Soon, however, the group became impatient with the length of time it was taking to get across the city.

“Guys, we should just Uber. Don’t worry, the accounts hooked up to my parent’s credit card so we’re all good,” freshman Mike Rotch said. The group nodded in agreement.

After the students discovered they had to pull the stop request cord on the street car instead of yelling “WE OUT,” the students found themselves downtown on Canal Street. “Bro, I’ve been here before,” freshman Stuart Dingleberry said, reflecting back on his only prior time off campus: Mardi Gras. “Why aren’t there any parades going on right here?” he questioned, mid-April.

Still in pursuit of the sale, the group strolled into the French Quarter. On a street corner, they passed a band playing jazz music. “Yo, this live music’s good and all, but have you heard my new stuff on SoundCloud dude? Search it,” freshman Hugh Jass said.

The students traveled inwards. Soon they determined they were hungry and decided to stop to eat. They sat down where they were and proceeded to Postmate McDonald’s, which was approximately two blocks away.

“I’ve heard this is a real New Orleans classic,” said one of the students, before putting in the order for his Big Mac.

Across the street from the students, a brawl broke out between two men.

Continuing through city, the group gained confidence. One of the students even ventured to wave at a New Orleans local.

“Wow, did you see that? The locals here love me. I’m basically one of them now,” he said after.

The group never did end up finding the Supreme hoodies they were looking for, but thankfully did happen upon a Gucci store, where they ended up purchasing some great pairs of slides.

“All is well in the world” they thought as they Uber XLed back as a group of three.