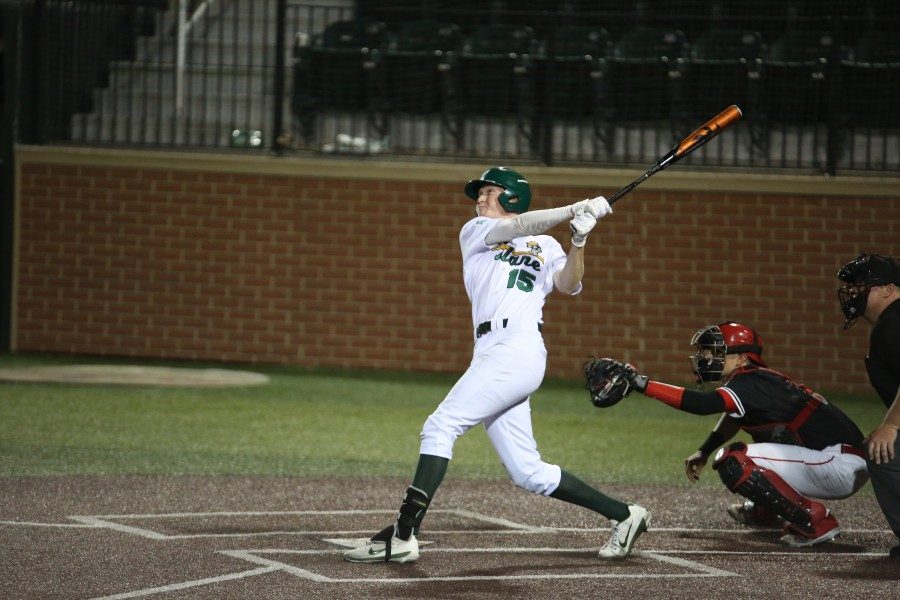 Tulane baseball’s Kody Hoese hits a game tying three-run home run with two outs in the ninth. Hoese and the rest of Green Wave baseball will be back in series play at home this weekend against East Tennessee State University.

Coming off of two consecutive series losses, Tulane baseball entered last weekend in dire need of a conference series win. This past Sunday, that wish came true as the Green Wave took down the University of Houston Cougars two games to one.

The Wave opened its series against the Cougars on Friday night in what would become a high-scoring affair. The teams traded runs until the fourth, when Houston brought home a whopping 10 runners. This left Tulane in an early 10-run hole, as the team trailed 12-2.

The Green Wave responded to this scoring outburst slowly but surely. Tulane brought home one runner in the bottom of the fourth, two in the sixth, three in the seventh and four in the eighth. While the Wave gradually chipped away at the Cougar lead, it still had a ways to go. Going into the ninth, the team still trailed 16-12.

Graduate reliever Ben White took the mound for Tulane to begin the telling ninth inning. White did not disappoint, striking out one and leading the Wave to a quick three up, three down top of the inning.

Tulane’s offense was clearly up to the challenge in the ninth. The Wave scored one run early, but quickly fell into a two-out hole. In a last-ditch effort, sophomore Kody Hoese hit a clutch three-run home run with two outs, tying the game. Senior Jonathon Artigues took this momentum one step further: he followed with a double, stole third base and rounded home to give the Green Wave a thrilling opener win.

The second game of the three-game series was postponed until Sunday due to inclement weather. This led to a doubleheader Sunday afternoon.

Tulane’s defense was stellar in the first game of the doubleheader. While the Green Wave only managed two runs, the team can thank its pitching corps for the win: sophomore Keagan Gillies and Ben White pitched a two-hit shutout over the Cougars.

Jonathon Artigues brought home the first run for Tulane in the third off an RBI single. Junior Trevor Jensen earned the Wave’s second run in the sixth off a throwing error. These two runs proved to be enough for Tulane, clinching the series with a 2-0 win.

The second game of the doubleheader did not favor the Wave quite as much. Freshman pitcher Josh Bates struck out a career-high nine batters, but the Tulane offense was not able to follow suit.

Neither Houston or Tulane were able to reach the scoreboard until the sixth inning, when junior Ty Johnson’s RBI single scored junior Grant Witherspoon and Jonathon Artigues. The Cougars took a 3-2 lead in the seventh, but this lead quickly vanished on Kody Hoese’s RBI single.

The game remained 3-3 until the ninth, when the Cougars’ Nick Slaughter hit a two-run RBI single, giving Houston a two-run cushion. Tulane could not manage a response and ultimately dropped this final game of the series.

Tulane will begin yet another weekend of series play this coming weekend against East Tennessee State University of the Southern Conference. The series kicks off Friday night at 6:30 p.m. on Greer Field at Turchin Stadium.