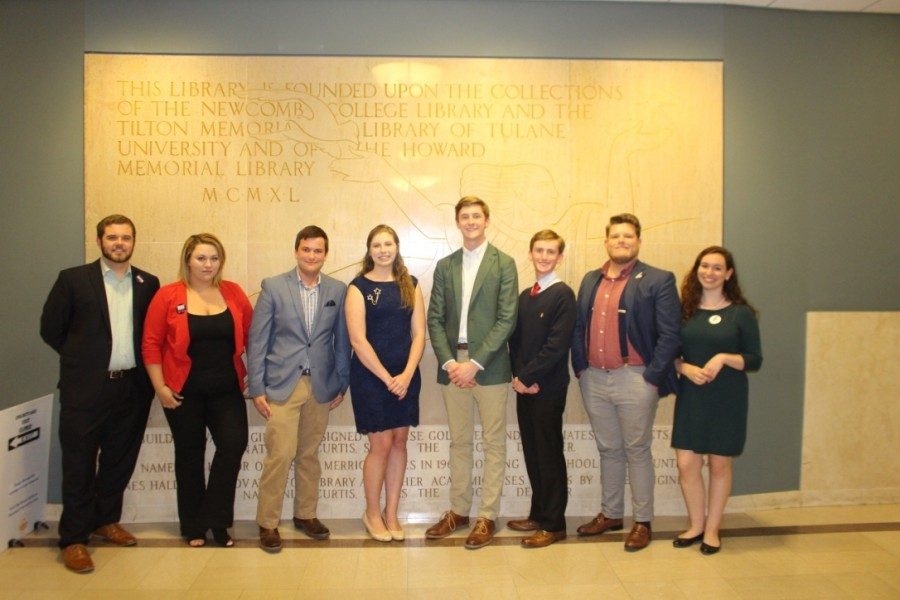 Members of four campus organizations gathered to discuss a range of political issues.

On Wednesday, April 11, a panel of Tulane students gathered in Joseph Merrick Jones Hall for a public debate on eight pressing political issues the United States faces today. Four groups were represented: the Tulane Democrats, the Tulane Republicans, Young Americans for Liberty and Turning Point. The debate was moderated by BridgeTulane, an organization devoted to political dialogue, with assistance from the Tulane Debate Team.

According to Lauren Bourgeois, president of the Tulane Republicans and coordinator of the debate, events like this debate are critical to promoting clear and healthy dialogue at Tulane.

“With everything happening in the media, these topics are hotly contested, and I think it’s important for students to hear what their peers thinks and that the narrative in the media is not the only perspective,” Bourgeois said. “We want people to really think about these topics, to provoke thought.”

Though the Tulane Democrats and the Tulane Republicans disagreed on every topic discussed during the debate, both groups shared Bourgeois’s sentiments about promoting healthy political dialogue. According to Henry Walther, the representative debater for the Tulane Democrats, civil discussion will be increasingly important in the near future.

“The 2018 midterms are coming up and I know that everybody is following that very closely,” Walther said. “In a politically-charged environment, I think it’s critical to have a thoughtful, reasoned-out debate and not just resort to ad hoc attacks.”

Over the course of the debate, all organizations were given the chance to argue their stances on controversial topics, including gun control, decriminalization of drug use, immigration and tax reform.

Though three of the four groups represented are known for holding conservative or right-of-center beliefs, the Tulane Democrats found common ground with their peer organizations on several issues, notably gun control and decriminalization of drug use.

— Cameron Westbrook (@CS_Westbrook) April 12, 2018
The Democrats found allies in Young Americans for Liberty and Turning Point regarding the war on drugs. Citing moral, utilitarian and fiscal reasons, all three condemned the United States’ current approach to regulating drug use.

“We just saw Turning Point and the Tulane Democrats agree on something, and I think that demonstrates how clear it is what we should be doing,” Marcus Maldonado, the representative for Young Americans for Liberty, said. “1.5 million people were arrested for drug violations in 2016. It seems that these policies are wasting time, wasting money and wasting resources.”

The topic of immigration brought these three groups in line again, each in support of broad protections for undocumented immigrants. For other issues, however, the room shifted toward more conservative stances. On the issue of gun rights, the Tulane Democrats were the sole advocates for broad reform, though Turning Point supported restrictions on gun rights in the form of a constitutional amendment.

Attendees like Margo Schnapf gave high praise to the event, but noted disappointment in the lack of representation on the panel of speakers.

“It was great to have multiple ideas and ideologies represented, but I wish there had been a different structure to the debate so that multiple speakers from each club could speak,” Schnapf said. “I also wish there was more representation on the panel because I honestly just wish there was a girl who could have spoken.”

Parallel concerns about representation were raised during the debate by the Tulane Democrats. While discussing criminal justice reform, Walther used his time to discuss the absence of racial diversity in the panel.

“There’s a problem that happens in a lot of criminal justice reform discussions. It’s a problem we are going to have in this debate, and that is that every person speaking here is a white person and this is an issue that primarily affects people of color,” Walther said. “I can’t overstate the importance of amplifying the voices of people of color or representation. That’s something our club needs to work on. It’s something every club should work on, and it’s definitely something Tulane needs to work on.”