Baseball coach Travis Jewett: the man behind the madness 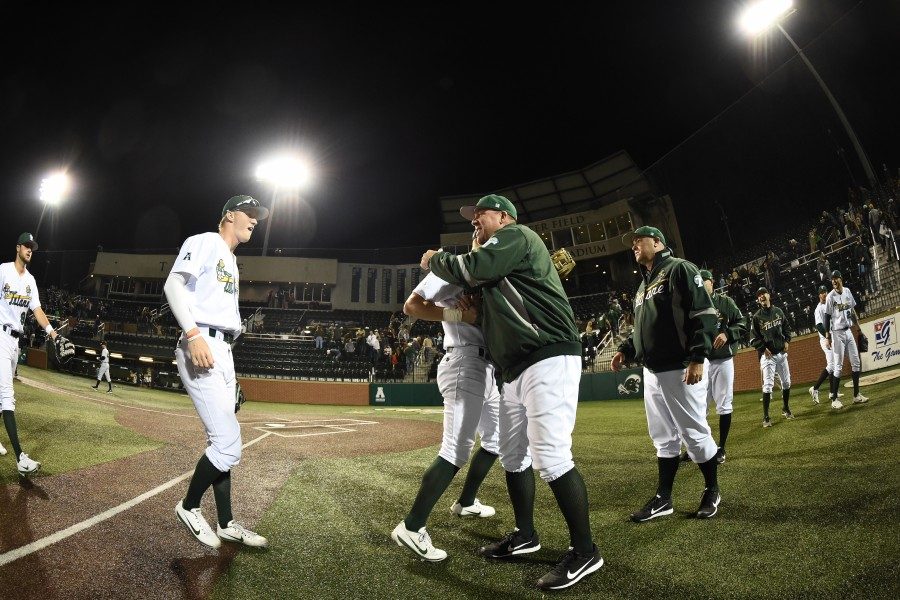 Head coach Travis Jewett celebrates with his team in a game against the Purdue Boilermakers. This is Jewett’s second season as head coach of the Green Wave.

This year, Travis Jewett began his second season as the head coach for Tulane men’s baseball. It will be the Tacoma, Washington native’s 20th year as a coach in D1 baseball. He spent 18 seasons as an assistant and associate head coach for various universities, including three years at baseball powerhouse Vanderbilt University, where he was promoted to associate head coach in 2016. Despite his continued success, Jewett did not initially go into coaching assuming that it would be his long-term career.

“Well, I would say that it was probably dumb luck in terms that it probably wasn’t what I was thinking about doing,” said Jewett. “It was just more of not really knowing what I was going to be doing and then an opportunity in the meantime popped up. So, the local junior college, where I was born and raised, reached out. They were looking for some young, dumb coach that didn’t need to make a whole bunch of money … I bit hook, line, and sinker and said, ‘what the heck, you know, give it a shot.'”

Jewett is particularly known for his success in leading hitters. During his first season at Vanderbilt, their batting average increased 45 points to .313. Of the 25 players he coached that were drafted to the MLB, 12 were hitters. It was his experience at Vanderbilt that drove him to come to Tulane, though it was more than just baseball.

“If you look at the two schools, I would say there’s a lot of mirroring qualities: elite education, destination cities, you know, the elite education part was what stuck to my ribs the most while I was there,” said Jewett. “Because we were playing good baseball and producing good players, stuff like that, but just knowing the fact that the kids were getting that life certificate in their back pocket while they were doing the baseball part.”

Tulane has played a mixed season this year, averaging .476 in wins. Jewett hopes to improve as the season goes on, asserting that growth and play throughout the season is just as, if not more important, than play at the beginning. He cites pitching as the area most in need of improvement.

“I would say that the game, just in general the way we’re playing right now, it all starts with the guy on the mound,” Jewett said. “If he can throw it over and keep the defense engaged and limit the other team’s free things, then I think the whole teams stays engaged and in ranges … There’s other times when they’ve pitched well and we haven’t scored, but that’s life and that’s baseball.”

For Jewett, he said the relationship between coach and player is of utmost importance in leading a successful team. He affirms that it’s all about “the people” and their mindsets and that his most important role is having good relationships with his players while also pushing them to be the best they can be, both on and off the field.

“This is a good group of kids,” said Jewett. “They like each other, they enjoy playing, they like being out here. We’re showing what we’re capable of doing. So we just gotta keep pushing and use a bit of this nine game homestead we got going, use a little bit of momentum. It’s a game of momentum, it can happen within a game, it can happen between games … I can see us being a dangerous team especially if we gain that consistency that this game requires.”