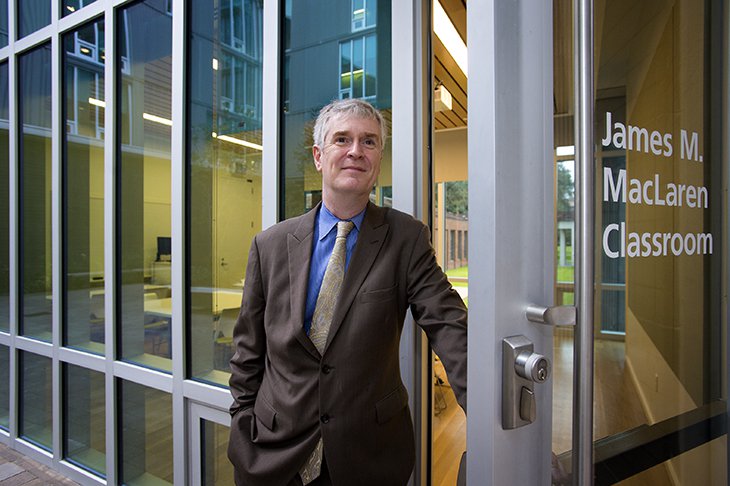 Dean MacLaren is leaving Tulane after 28 year to be a provost at St. Xavier University in Chicago.

After serving 28 years at Tulane as a professor of physics, Associate Provost, Dean of the Faculty of the Liberal Arts and Sciences and the founding Dean of Newcomb-Tulane College, Dean MacLaren says goodbye to Tulane.

When he first came to Tulane, MacLaren spent 10 years as a professor conducting peer-funded research, training graduate students and working with undergraduate students in research and teaching. He then became the Chair of the Physics and Engineering Physics Department.

After four years as department chair, he became the Associate Provost. During his time in the provost’s office, MacLaren created the TIDES program and made strides to instill values of academic equity across campus. He also worked with conflict of interest policies for faculty members.

When Hurricane Katrina hit in 2005, MacLaren and his family relocated to Houston, but this did not cease MacLaren’s dedication to the university. In Houston he visited students who were displaced, helped transfer coursework and collaborated with a team to put the university back together.

This morning, Dean MacLaren announced he will be leaving Tulane after 28 years to serve as the Provost at St. Xavier University in Chicago.

“It was an incredibly busy time,” MacLaren said. “I was involved with the president, the provost, and four or five university presidents in looking at the renewable plan for Tulane that restructured the university significantly, including the creation of Newcomb-Tulane college.”

When he returned to New Orleans, he became the dean of arts and sciences and the dean of faculty, devoting his time to ensure a smooth transition after the storm.

“We worked with the music department, and our general council worked on replacing all the instruments …,” MacLaren said. “All of the pianos were damaged in the school. We were making sure we had all the equipment so that students could come back and have all of the facilities that they needed and faculty had what they needed. It was a lot of work in the fine arts department where stuff got damaged because it was underwater.”

The University restructured in 2006 with the creation of Newcomb-Tulane College. MacLaren was asked to serve as the founding dean, and he has since held this position for 12 years.

His responsibilities revolved around academic advising, the Honors Program and study abroad. MacLaren played a large role in the founding of the Academic Success Center and the Center for Academic Equity.

“One of the things I’m proudest of is the work that the Center for Academic Equity has done,” MacLaren said. “This university has not until recently put a high level focus on supporting college accessibility and supporting diversity inclusion in the student body … What we want to do is make sure we continue that trajectory by helping the students here.”

MacLaren has accepted a job as provost at St. Xavier University in Chicago.

“In the end, I decided I wanted to do something different for a while, work with faculty more, as well with students,” MacLaren said. “This opportunity with U Chicago came up and it just seemed like I could have a real impact. The other irony is the president is a Tulane grad.”

After working almost three decades at Tulane, MacLaren taught and served generations of families. MacLaren said he has a great sense of pride that Tulane is playing a role in students’ successes.

“To the students, I hope I will still hear from many of you and hear of your successes after you graduate,” MacLaren said. “It’s been a real privilege to work with some amazing students. When I look back to my undergraduate [years], you do way more than I ever did — I was kind of a slacker I think.”