Bright Lights in the Big Easy 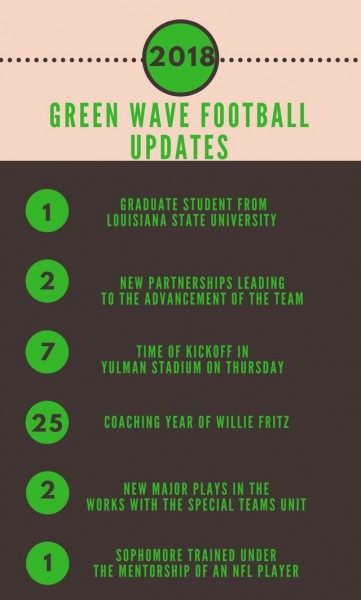 Exactly one week after most freshmen experienced its captivating atmosphere for the first time, Benson Field at Yulman Stadium will officially open its doors to host Wake Forest University in the season opener of the Green Wave football season.

Tulane football has undergone some major changes in the past few months. Along with the new crop of eager freshmen, recent Louisiana State University graduate Justin McMillan is joining the Green Wave. Head Coach Willie Fritz added McMillan as a likely second-string quarterback behind senior Jonathan Banks. McMillan, who only used two of his eligibility years at LSU, might prove to be a vital asset to the team in upcoming games. Fritz has continually emphasized the importance of recruiting upperclassmen and graduate students due to their enhanced feel for Division I football. 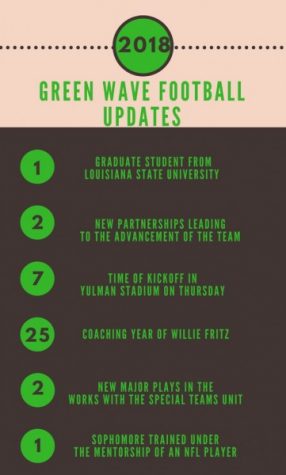 Green Wave football fans will also see a new face at center on Thursday. Sophomore Corey Dublin recently moved from his position as guard to fill the vacant spot at center. Dublin has been practicing closely with Banks to maximize both of their talents in preparation for the upcoming season.

Alongside new partnerships between current team members, one Green Wave player spent the summer under the mentorship of a former teammate. Redshirt sophomore defensive lineman De’Andre Williams enhanced his skills by learning from current Los Angeles Rams defensive tackle Tanzel Smart. Williams has returned to the team ready to take on a leadership position, and many teammates have noticed a change in his work ethic after his time with Smart. As one of the strongest assets to the defensive line this season, Williams hopes to utilize his

With so many changes occurring within the offense and defense, the special teams unit decided to add a few new tricks to their playbook.  These players have been practicing obscure plays such as onside kicks and punts from their own endzone. Fritz, entering his 25th year of coaching, is confident that the team can pull off these typically difficult plays during this season.

As Tulane reigns in a new year and new season of football, Green Wave Athletics will also take time to recognize those individuals who brought the program to new heights during their time at Tulane. Former Head Coach and Athletics Director Mack Brown will be inducted on Thursday into the College Football Hall of Fame. The former AD will be invited into this Hall of Fame through the traditional National Football Foundation Hall of Fame On-Campus Salute. Brown spent three years as head coach, leading the Green Wave to the Independence Bowl in his final season before eventually becoming the coach of the Texas Longhorns. Through his illustrious coaching career, Brown coached 37 First-Team All Americans, 11 Conference Players of the Year, 110 First-Team All-Conference Selections, and six Academic All-Americans.

Carrigan English | Senior Staff Artist
Green Wave football will kick off in Yulman Stadium on Thursday against Wake Forest at 7 p.m. The game will also be broadcast on the CBS Sports Network and 1280 AM New Orleans.