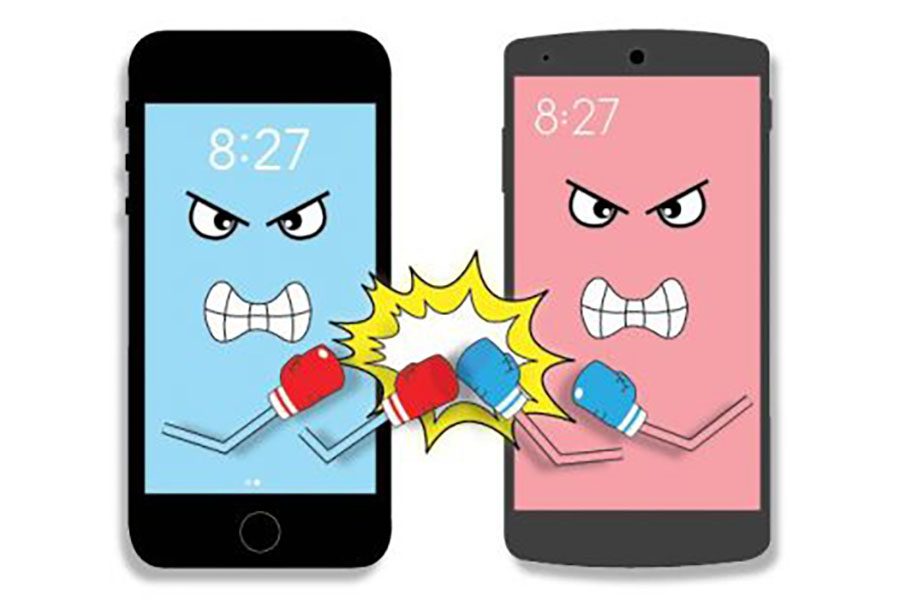 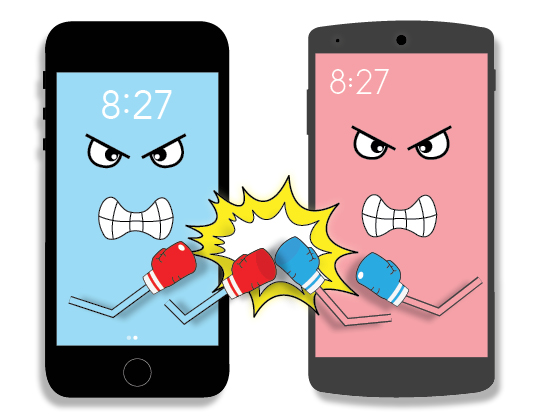 iOS versus Android is arguably the most stirring, long standing debate since the blue/black vs. white/gold dress conspiracy. As the dominant culture of tech-savvy, smartphone-toters gets more advanced with each new tech-cessory, new Tesla controversy or new Apple announcement, an important question remains: which smartphone software rings superior? In short, Android or iPhone?

“Part [of why people care] is elitism, maybe because iPhones are seen as nicer by some people,” junior Becca Moran said. “But honestly I think it comes down to iPhones being prettier and camera quality.”

The physical aesthetic of the hardware itself is definitely a contributing factor to making a decision in the phone-buying process. While both Androids and iPhones tend to have a sleek body, several Tulane iPhone users claim that iPhones are less bulky and overall more attractive than Androids, in terms of hardware and software.

me: androids are ugly

“Generally speaking, iPhones are easier to use,” senior Henry Stoddard said. “Their user interface is simple and sleek, and that draws a lot of people to use them.”

apple: iPhone 8 camera is better than ever!

android user: we had that already [] [] pic.twitter.com/VOHFNNst7I

After speaking to some Tulane iPhone users, it seems that one of the most attractive features of the iPhone are the smaller functions and accessories.

In addition to the tapback responses, iPhones have standardized emojis that are visible to users on all social media platforms. All Apple products are also compatible with one another, which makes buying accessories easier.

“I like how user friendly they are and how Snapchat videos don’t show up super grainy,” Moran said. “I also like the whole ‘being able to share your location’ thing.”

The “us versus them” aspect of the iOS vs. Android debate hints at something greater than just trivial opposition. iPhones and Androids have bred a culture – though the iPhone users seem far more cult-like.

“You feel more connected to a person with an iPhone because of all the features that are Apple specific like FaceTime, iMessage,” junior Ireti Akinrade said. “Having an iPhone signals that having this technology is something you value enough to keep up with the latests models.”

Androids are far more accessible than iPhones in this respect, as there are several more models at more varied prices. With iPhones, a new model is released every year or so, and iPhone users line up at their nearest Apple stores to get their hands on the latest tech. Some iPhone users, however, question the integrity of the new models’ rollouts.

Me: I don't think I need to upgrade. My current iPhone works gre–

“I also hate how fragile iPhones are and how Apple slows old models down when they release new models,” Moran said. “It’s shady.”

While there is no actual proof that older iPhone CPU performances slow at the break of a new iPhone release, benchmarking software company Futuremark chalks up this perception to a psychological effect (because people know there is something newer available).

Both Android and iPhone users generally admire the innovation of their smartphone software, though not always for the same reasons. In fact, Stoddard has proposed he is considering switching back to an Android from his current iPhone.

“I think I’ll switch back to Androids because they have continued to innovate whereas iPhone hasn’t,” Stoddard said. “Originally Apple really led the charge with smartphones, but now they just copy what other brands do. Fingerprint technology and facial recognition? Those were in Androids years ago. Companies like Google and Samsung are really beating Apple out on their progress and innovation.”

On the other side of the spectrum, some smartphone users don’t really care.

“I have no strong opinions,” junior Emma Braunstein said. “I mean, Androids aren’t deal breakers. If someone bought me an Android I’d use it, but I’m not buying that shit myself.”