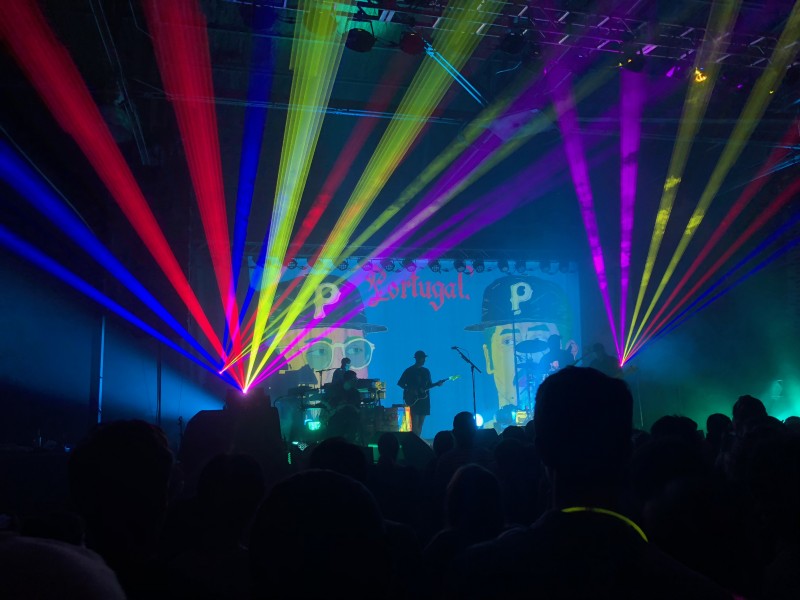 This Friday night, Portugal. The Man gave a dynamic and energetic performance filled with stimulating visuals, great music and videos of naked bodies that kept the audience at Sugar Mill entranced. The band showcased their 2017 album “Woodstock” along with other songs from their past albums and several gripping covers.

The Sugar Mill was packed full of PTM patrons ranging in age from high school boys raging in the front to dads drinking their beers in the back.

Los Angeles band Chicano Batman opened the night with soulful energy full of music derived from Central and South America. The Latinx band’s love for their music was contagious and got the audience rejuvenated and excited for PTM. The band’s mission is to show people that there is funk and soul in Latin America, too. They made sure the Sugar Mill audience wouldn’t forget it.

Shortly after Chicano Batman, a band member from PTM came on stage to introduce a special guest from their home state, Alaska, to talk about preserving tribal culture in Alaska.

Following the speech, a silly Beavis and Butthead montage that turned into a modern display of human bodies opened their show and set the tone for a funky night. The first song to open their set was a rendition of Metallica’s “For Whom the Bells Toll,” followed by another cover of Pink Floyd’s “Another Brick in the Wall” before the band played their own “Purple Yellow Red & Blue.”

Though the members of PTM didn’t talk or banter with the audience, they had a series of messages on the stage that made the audience think, laugh and pay attention.

When the stage read, “Your mom loves this song” the audience went crazy knowing the band’s hit song, “Feel It Still” was about to be played. PTM did not disappoint their fans with this live rendition of their smash hit.

Along with the odd but engaging videos playing behind the band, the stimulating light show kept the audience feeling like they were in a club. The show was colorful and had unique blends between lights and fog.

The band kept the crowd singing, swaying and dancing til the last minute of the show and finished the concert off with an encore that included their song “Sleep Forever” and then a cover of The Beatles’ “Hey Jude.”