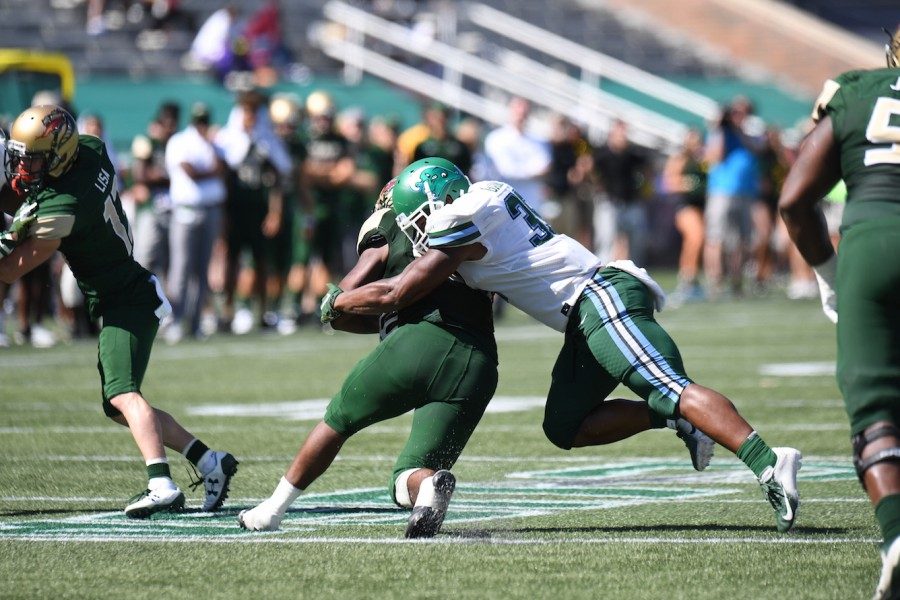 Coming off a loss at the hands of the University of Alabama-Birmingham, the road is not getting any smoother for Tulane football. This weekend, the Green Wave heads to Columbus, Ohio, to take on one of the premier football programs in the NCAA. The Ohio State University Buckeyes, 3-0 and ranked No. 4 in the nation, boast elite talent on both sides of the ball and will likely be Tulane’s toughest opponent all season.

Tulane quarterback Jonathan Banks will look to bounce back from a difficult passing performance against UAB. The senior dual-threat quarterback, who has often relied on his ability to run the ball to compensate for average passing numbers, was extremely inefficient through the air last weekend. Banks only managed to connect on 7/24 passing attempts for a 29.2 percent completion rate. Running backs Darius Bradwell and Corey Dauphine continued to run the ball fairly effectively, however, as the Green Wave has established itself as a run-first offense. Unfortunately, it wasn’t enough, as UAB was able to march down the field in the fourth quarter, capping off a seven-minute drive with a touchdown to take the lead for good. Tulane head coach Willie Fritz will certainly be inclined to establish the run early again against Ohio State if Tulane has any hope at upsetting the 37-point favorites on the road.

The potent Buckeye offense is led by sophomore quarterback Dwayne Haskins. Haskins has quickly pushed himself into the Heisman conversation with an 11:1 touchdown to interception ratio to begin the season, as well as an impressive win over Texas Christian University last weekend in Dallas. Additionally, Ohio State has been extremely effective in its rushing attack, with the combination of junior Mike Weber and sophomore J.K. Dobbins combining for more than 500 yards in their first three games.

Defensively, the spotlight always shines brightest on All-American defensive end Nick Bosa. Bosa, entering his third and likely last season as a Buckeye, has already been able to rack up four sacks this season and will likely be a top pick in the upcoming 2019 NFL Draft. The defensive player has been a blue-chip prospect since high school and came to Ohio State as a five-star recruit on the heels of his brother Joey, a Buckeye defensive end from 2013-2015. Joey was a high draft pick who currently plays for the Los Angeles Chargers, and he compiled an impressive 23.0 sacks during his first two seasons as a pro. Draft experts predict Nick could be drafted even higher. Tulane’s line will luckily be spared from having to face up with Bosa, as he is expected to sit out this Saturday.

Saturday’s game between Tulane and Ohio State also marks the controversial return of Buckeye head coach Urban Meyer, who is coming back from suspension. Meyer was suspended after reports surfaced that he knew of the domestic violence allegations against his assistant coach, Zach Smith, well before Smith was fired in July. Meyer will certainly be facing a significant amount of scrutiny when he takes the field this Saturday, and for the foreseeable future.

The game will begin at 2:30 p.m. on Saturday, and students can tune into Tulane’s Sports Twitter (@hullsports) for live updates.