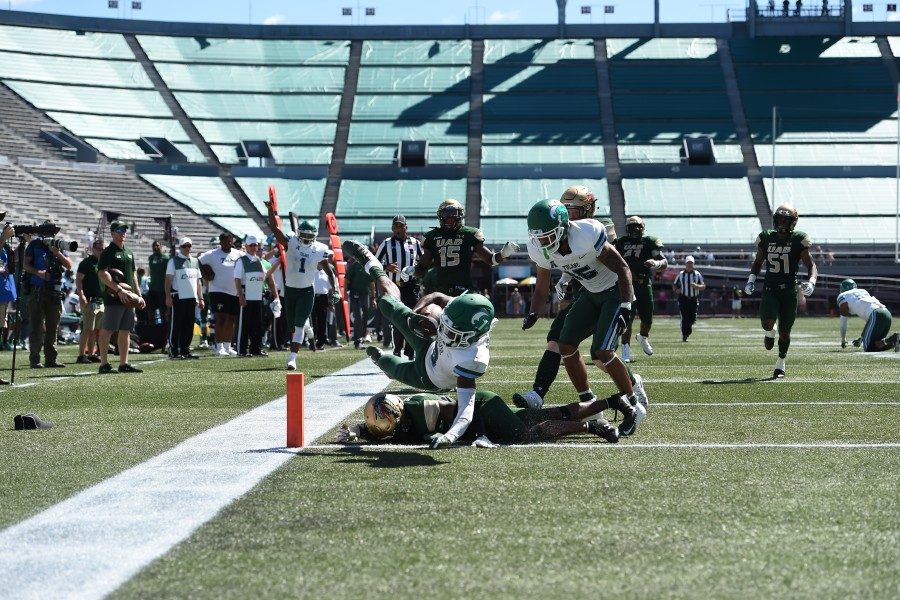 After facing one of its toughest opponents all season, Tulane football is back on its home turf and ready for a much-needed win against the University of Memphis Tigers.

While the first half of last week’s game was admittedly difficult, Tulane’s defense shined through in the second half of the game, holding the Ohio State University Buckeyes to only one touchdown. Sophomore Cameron Sample and junior Thakarius Keyes both reached new career highs for tackles, with senior Roderic Teamer Jr. coming close to a personal best as well.

Offensively, despite fierce opposition from the Buckeyes, the Green Wave still managed to rush for 100 yards, their 31st  consecutive game to do so. Junior running backs Darius Bradwell and Corey Dauphine continue to be an excellent duo, paving the way for Tulane’s only touchdown, scored by Bradwell.

Tulane’s dedication and refusal to give up in the face of staunch adversity has been noticed and praised by the Tigers’ head coach Mike Norvell.

“This is a team that battles, a team that is very physical and has some extremely athletic young men on the team,” Norvell said. “All the things that it takes to win a conference game on the road, we have to do.”

After a difficult win against University of South Alabama, Memphis will be looking to continue its early season momentum. This season, quarterback Brady White has already passed for 12 touchdowns, and the Tigers star running back, Darrell Henderson, has averaged 211 rushing yards over the past three games.

As this will be the Tigers’ second conference game and Tulane’s first, both teams will be looking for a decisive win. Odds point to Memphis in this one, as the team is favored by a 14 point spread.

This will certainly be a challenging game for the Green Wave, but Tulane head coach Willie Fritz believes that the team will maintain its stamina and avenge some of its previous losses.

“We told the guys we’ve got to turn, flip the script, move on. We can’t sit there and worry about the last ball game,” Fritz said. “You’ve got to make sure these guys understand this is a long season.”

Kickoff is set for 7 p.m. on Friday, Sept. 28 in Benson Field at Yulman Stadium. The game will be broadcast on ESPN2.