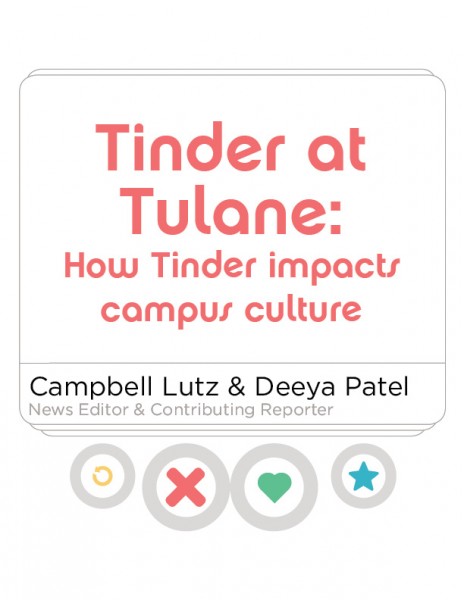 Brian, a freshman from Chicago, is a frequent user of the popular dating app, Tinder.

Tinder and other online dating apps are often used on Tulane’s campus. The reasons for using these apps, however, vary widely.

Guy on Tinder: “Why are you on tinder?”

Me: “wHy ArE yOu On TiNdEr?” pic.twitter.com/ijYjwh2e6i

“Tinder was born on a college campus, founded by USC students, and college students remain a core part of our user demographic,” Lauren Probyn, director of global marketing and events at Tinder, said.

According to Probyn, more than 50 percent of Tinder users are age 18-24.

“Given that there have been more than 20 billion matches made on Tinder to date, it is clear that this generation is more open to online dating than ever before,” Probyn said.

Not all users have dating in mind. One student, Jackie*, said she uses Tinder as a way to make some extra money off of matches.

“I used Tinder about once or twice a week to scam guys into giving me money,” Jackie said. “I leave my Venmo username in my bio, chat with matches and sell my snapchat code or promise nudes that never get delivered.”

She said she has been able to make as much as $150 from a match. Though she has used Tinder to hookup before, she now has a boyfriend and only uses the app as a form of monetary gain.

“Regarding the boys I have met with on Tinder: they tend to be quite clingy,” she said.

Sophomore Hadlee Calvert said some students on Tinder are frustrated with the lack of seriousness of other users.

Calvert said after she did not to respond to one match’s message, she was sent a longer second message: “Not sure why most females are even on Tinder honestly. Countless matches and msg sent without ever a reply … The male motives are pretty cut and dry but for the females it seems to be more of a self esteem booster to just see how many men will like their edited, filtered selfies.”

I found my professor on tinder (grad student). 10 retweets and I’ll swipe right and if we match I’ll ask for extra credit

Other students say they use Tinder to have fun or to meet new people.

“[Tinder is] how some of my friends met their good guy friends or even a boyfriend last year,” sophomore Tessa Millare said. “[It] can introduce you to so many people that you probably would have never met otherwise.”

According to PhD candidate in sociology Emily Starr, students use Tinder for many reasons, including “the hope for new and exciting experiences, the opportunity to meet new people and the validation that comes from being chosen for in-person encounters.”

Students also said Tinder is a way to hook up with other students on campus.

Not every student views hookup culture as bad. While some view this culture negatively, others seem to find this to be a natural progression in our society.

According to Starr, the hookup culture at Tulane may not be as pervasive as it is perceived.

Though Tinder does present a new and popular way for students to hook up, it is not the root of campus dating culture, according to Starr.

“While Tinder might add a new dimension of how sexual encounters are initiated, I don’t think that if suddenly Tinder and dating apps vanished from our smartphones, hookup culture would wither on the vine,” Starr said.