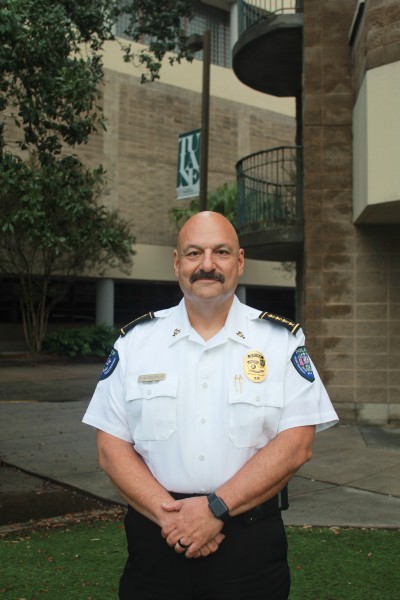 On Oct. 15, the Tulane University Police Department swore in its new chief of police.

Kirk Bouyelas, who has served the New Orleans Police Department for 31 years, will now head a group of more than 80 police officers and a myriad of support services such as Personal Escort and Active Shooter Training.

His experience with public safety is not limited to field work, however. As he has progressed in his career, Bouyelas feels he has grown an increased recognition for the importance of policing.

“As a young officer, I probably would have said that public safety was exclusively about putting criminals in jail,” Bouyelas said. “With experience comes a deeper appreciation for how policing can be accomplished by taking a more holistic approach.”

At NOPD, Bouyelas served as the Deputy Chief of Operations and later worked in the Investigations Bureau, where he gained exposure to the crime lab and evidence room.

“By commanding both operations and investigations, it provided me with a broader and more diverse level of experience,” Bouyelas said.

Policing has been an integral part of Bouyelas’s life, stemming all the way from his childhood. His father and uncle worked for NOPD for 24 and 30 years, respectively.

“I guess you could say that police work was in my blood,” Bouyelas said. “As a 10 year old, I loved to polish my father’s collar brass and badge. Anything to be around the uniform and badge was exciting to me as a child.”

Bouyelas’s appointment aligns with a wave of reforms Tulane public safety has undergone in recent times. Some notable incidents include switching from Landmark Security patrol officers to Allied Universal Security Services and the resignation of multiple TUPD officers after allegations of undue use of force in spring of 2018. Chief Operating Officer of Tulane Patrick Norton has been overseeing Tulane’s goal of increasing safety measures.

“This goal will be achieved [by] ensuring we recruit and retain the best TUPD officers, deploy the right number of patrols, and ensure that we have the right amount and type of infrastructure through lighting, cameras, facilities, and technology,” Norton said.

Bouyelas does not plan on losing this momentum.

“My mission is quite simple, but will take a concerted effort by the entire Tulane community,”  Bouyelas said “How do we get there? Well, a safe campus community is one where everyone works together in a coordinated and collaborative way, forming partnerships to promote safety, manage risk and reduce the fear of harm.”

Collaboration is part of Tulane’s overall safety plan. TUPD has made several efforts to connect with the campus as a whole in the past two years, implementing programs such as Pizza with the Police and Coffee with a Cop.

In 2017, they began posting public safety announcements, which includes posts such as “Mardi Gras Safety Tips” and “Hurricane Season Readiness.” Bouyelas said he hopes to be just as involved in the Tulane community.

“My wife worked at Tulane for many years and loved her time here. Now it’s my turn,” Bouyelas said. “Tulane is a special place and I’m glad to finally be a part.”