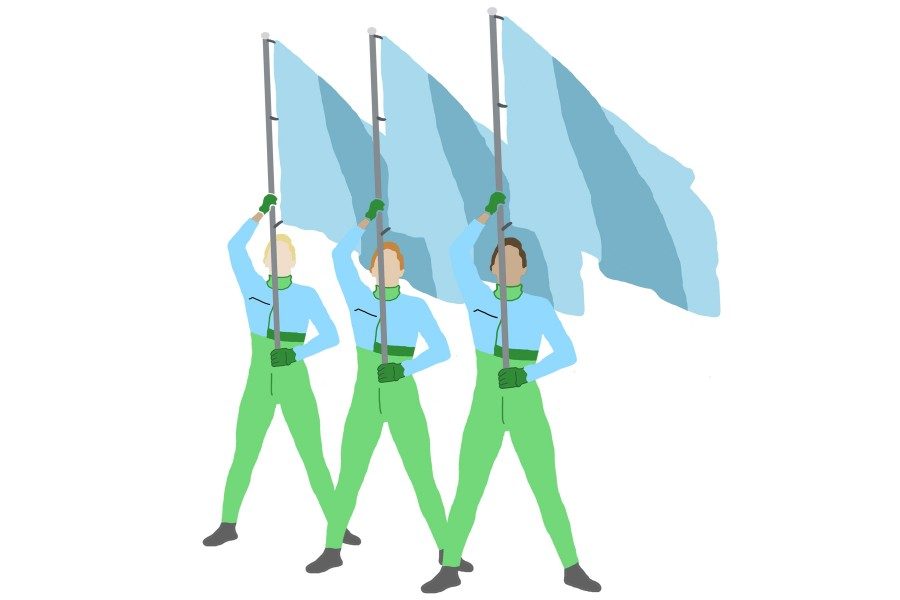 Color guard is not for the uncoordinated. Guard members perform with an almost inherent sense of rhythm, all the while deftly manipulating rifles and flags. The dexterity and dynamism of the guard allows it to function as one of Tulane’s premier spirit organizations.

To see this athleticism in action, look no further than the nearest football game. The guard performs with the Tulane University Marching Band during each halftime show, producing choreography with rifles, flags of various sizes and occasionally even other props, as the shows for each season demand.

This season, the guard even choreographed a routine with umbrellas for a show celebrating the 300th anniversary of New Orleans. This optical creativity adds excitement to any halftime performance and, according to color guard captain Rosalind Kidwell, the guard enjoys having such an opportunity for invention.

“I love performing and so color guard is a great way to be able to do that in front of an actual audience alongside the band,” Kidwell said. “It really enhances the field shows by giving it a visual aspect that wouldn’t be there without the color guard.”

Members also perform in the stands with pom-poms, dancing to short stand songs played by the band. Each year for the annual Band Day football game, the color guard teaches and performs a routine with local grade-school students.

In the spring, color guard performs in at least four Mardi Gras parades, along with the marching band and the Shockwave dance team. In the past, the guard marched in parades for the Krewes of Thoth, Pygmalion, Bacchus, Rex and d’Etat.

After Fat Tuesday, color guard members begin to choreograph a special routine for their own showcase in April. For this performance, the guard generally incorporates more dance elements and completes trickier tosses than it does in the football and parade seasons.

And, while spinning, twirling and tossing flags takes a substantial amount of dexterity and skill, Kidwell encourages anyone who is interested to audition.

“We’re always looking for more members, so you can always join at any experience level” Kidwell said. “We’d love to have people come out.”