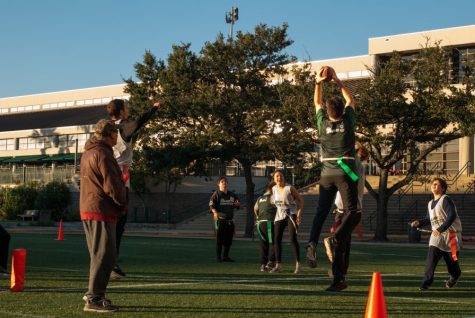 Grant Barnes – Senior Staff Photographer
Green Wave football is not the only team reaching the end zones of Uptown – Tulane Special Olympics hit the fields outside the Reily Student Recreation Center before Thanksgiving Break for the championship of its ongoing flag football tournament. This is just one of the many athletics events Special Olympics hosts each year for athletes across the New Orleans area.

The 2018 edition of this event treated the organization well: 22 athletes and 42 student volunteers were just a sample of the many faces present outside Reily. Athletes, volunteers, parents and this year’s newly introduced Spirit Squad soaked in the dwindling Friday sun watching the teams crisscross the field, each working towards a long sought-out tournament victory.

For the athletes, the tournament is often about much more than a little friendly competition. George Huguley, one of the competitors, expressed how the tournament enabled him to turn back the clock to his playing days in high school.

“The tournament is fun,” Huguley said. “I used to play football at my old school, and we won the state championship.”

While the event most certainly proved enjoyable for the athletes involved, creating this fun competition is only one of the several goals Special Olympics sets out in planning events. Co-president Grant Little emphasized that the organization’s goal to bond communities in such events is just as, if not more, important than the competition itself.

“Basically our overall goal with any Special Olympics event is to form some relationships between members of the New Orleans community and people here at Tulane,” Little said. “And then obviously we have competition as an aspect of Special Olympics.”

The Tulane organization is affiliated with the larger branch of Special Olympics since it represents not only the New Orleans area but the entire state of Louisiana. Volunteers go through extensive training, as their role is vital to the running of the national program. Co-president McCall Phillips reminds these volunteers that their hard work most certainly does not go unnoticed.

“It’s just a lot to ask, especially for a school club which is supposed to be more chill … this is a big commitment,” Phillips said. “We are really appreciative for our volunteers for consistently showing up and being willing to put so much time and effort into something Grant and I care so much about.”

The dedication of these volunteers is not merely appreciated by the leaders of the organization, but the players as well. Many of the athletes could be seen smiling from ear to ear as they played amongst Tulane students and other volunteers. Two of the players, Stephen Slattery and Dakota Ory, had infectious enthusiasm during could not reign in their energy from the game and are anxiously awaiting next year’s competition.

This is not the last event of the school year, however, as the organization has a busy spring calendar. Phillips put great emphasis on Special Olympics’ upcoming Louisiana State University v. Tulane basketball game in the Avron B. Fogelman Arena in Devlin Fieldhouse early next year.

“We would love to see as many Tulane students and athletes there as possible,” Phillips said. “Because ESPN has agreed that if we can pack the stands, they will broadcast the game.”