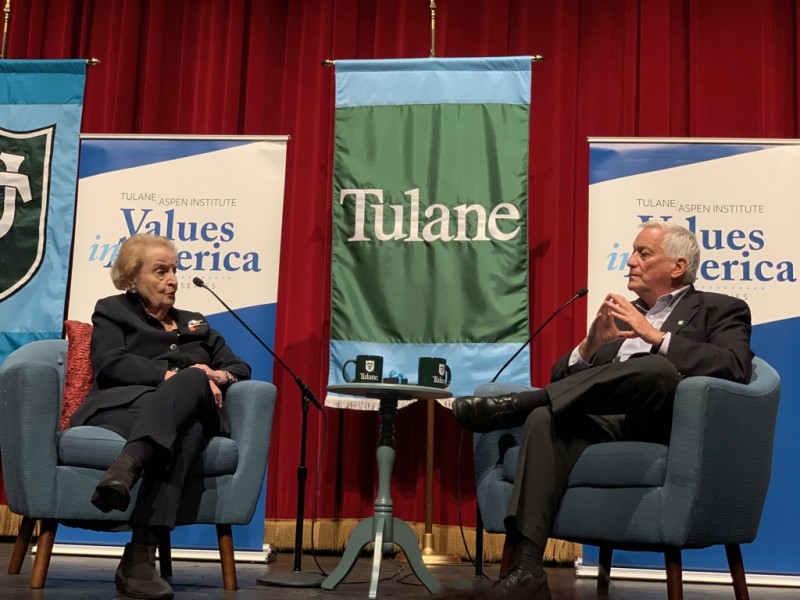 In an interview moderated by Tulane University’s acclaimed professor of history Walter Isaacson, former Secretary of State Madeleine Albright shared her thoughts on fascism, nationalism and populism in today’s global politics. The talk, as a part of the Tulane-Aspen Institute Values in America Speaker Series, took place in front of an overflowing auditorium in Dixon Hall.

An immigrant from Czechoslovakia, Albright moved to the U.S. to escape the new communist regime that took over the country. Earning her Doctorate degree from Columbia University, she met Zbigniew Brzezinski, who would later become her boss on the National Security Council under President Jimmy Carter’s administration.

After Carter’s presidency, Albright became a faculty member at Georgetown University, where she would advise Democratic officials on foreign policy matters. That influence paid off in 1992 when Bill Clinton was elected president. After helping him assemble his national security team, she then became U.S. ambassador to the United Nations and later, secretary of state – the first woman to do so.

Albright is now an advocate for women’s roles in politics and continues to teach at Georgetown University’s School of Foreign Service. She has also written several best-selling books, one of which, “Fascism: A Warning,” brought her to speak at Tulane last week.

Starting off the talk with a short background of her childhood living in a Europe split between warring powers after World War II, Albright described “having escaped … twice, fascist [regimes] … for communists are fascists also.”

Albright also lauded the opportunities that this country had given her as an immigrant, going so far to state that “one of [her] favorite things to do [was] to give people their naturalization certificate” when she was secretary of state.

Even before the 2016 presidential election, however, Albright started to notice a troubling pattern in international politics, a “rise of people [who] exacerbated their differences rather than trying to figure out how to find common ground,” which led her to document certain instances in her new book.

“Fascism is not an ideology,” Albright said. “It is a process for getting and taking power.”

Moving on to more current news, Albright disputed the Trump administration’s policies demonizing the media and addressed the increasingly divisive role that certain news outlets have played, from both conservatives and liberals.

“There may be fake news, but there are no fake facts,” Albright said.

Concluding the interview, Albright described her optimism for the future, specifically the resiliency of American democracy. Calling the U.S. “the indispensable nation,” Albright reminds us that “there is nothing about the word indispensable that says alone … it means that we need to be engaged.”

Reflecting on her visit to Tulane, Isaacson commended Albright’s influence on American values and her gracious personality.

“Secretary Albright offers a voice of reason and common sense in a time when we have become too polarized. She reminds us of basic American values, such as the fact that respect for one another is core to a democracy,” Isaacson said. “I hope the audience and students will appreciate the lessons from her history: escaping the Nazis and then the Communists and dedicating her career to helping America defend the ideals of freedom and democracy.”