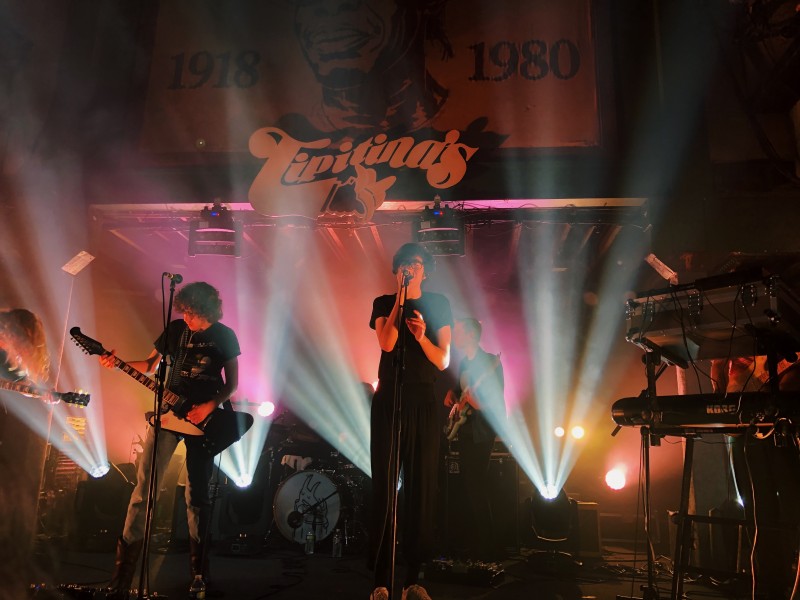 This Tuesday, Feb. 26, Seattle-based band Car Seat Headrest drew crowds at Tipitina’s Uptown, working the audience into a frenzy with its unique blend of lo-fi indie rock. Strobing lights and incendiary guitar riffs entranced all those in attendance.

The night began on an electrifying note with Naked Giants, a psychedelic surf rock band also hailing from Seattle. Reminiscent of a punkier and sludgier Beach Boys, the group brought high energy and indie-boy charm to the stage. The percussionist drummed furiously, sweat visibly dripping onto his cymbals, perspiration launched into the air with every crash. During the last half of its set, the band played one of its new singles, “Green Fuzz” – a nine-minute-long, grunge-fueled, psychedelic rampage.

Though Car Seat Headrest began as a Will Toledo solo project, it currently consists of seven band members, including three members of Naked Giants. It took the stage around 10:15 p.m., beginning with a brand new song, titled “Can’t Cool Me Down.” The second song of the set, “Bodys,” was a crowd favorite. Its ferocious guitar-synth fusion evoked a near primal response from the audience, amplified by rainbow lights that pulsed along to the rhythm.

About halfway through the set, the band performed a reimagined “Powderfinger” by Neil Young, fusing it with the emphatically depressing “Sober to Death.” The lead guitarist took the mic on this track, imbuing the song with a groovy 70’s twang. Despite being a relatively lethargic tune, the final song of its set, “Destroyed By Hippie Powers,” incited an unrelenting mosh pit – forcing security at the venue to step in and stand sentry in the dying embers of the pit.

Acquiescing to the demands of the crowd, Car Seat Headrest reclaimed the stage for one capstone track. One of the drummers pulled a fan onstage to join the rhythm section, playing the cowbell along to its 13-minute long masterstroke “Beach Life-In-Death.” As the band left the stage one last time, the audience flooded out into the pouring rain, riding the high of an unforgettable show.