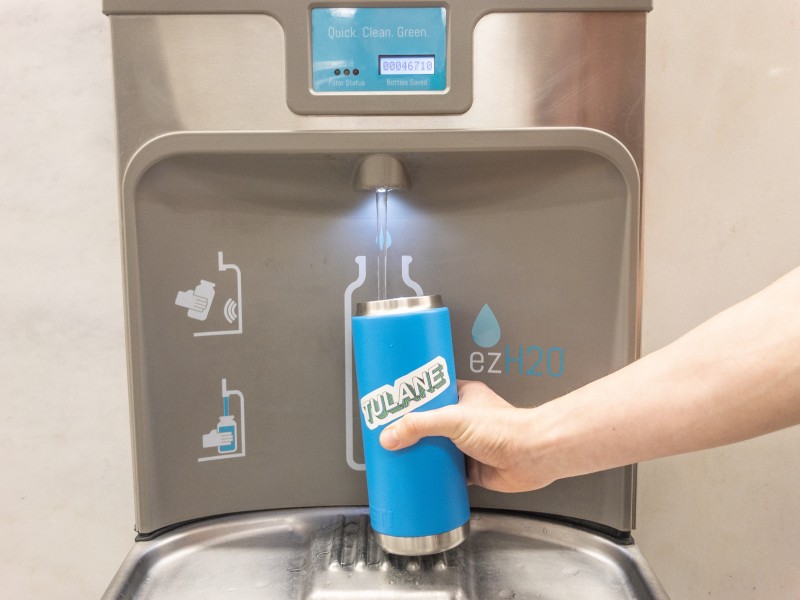 Undergraduate Student Government has introduced a number of initiatives this semester to improve student life. Most recently, USG has focused legislative efforts on the Howard-Tilton Memorial Library, refillable water bottle stations and the Know Your Rights Week campaign.

In the midst of midterms, some Tulane students scramble for study spaces. While others prefer the dorms’ study spaces, local coffee shops or spots in the Lavin-Bernick Center for University Life, many turn first to a more traditional study space — the library.

Typically, HTML is open from 7:30 – 3:45 a.m. Sunday through Thursday, 7:30 a.m. – 9:45 p.m. Friday and 9:00 a.m. to 9:45 p.m. Saturday. Despite the later hours, the second through sixth floors close at 1 a.m. Sunday through Thursay. Restrictions on times and floor availability have previously led students next door to Loyola University’s library to try and find study space during midterms and finals.

In response to a lack of study space, USG has collaborated with Howard-Tilton to offer a 24-hour service Feb. 10 to March 1. This service is restricted to the first floor of the library, which will be open from Sunday at 9 a.m. until Friday at 9:45 p.m.

“Although I think the 24/5 thing is incredible in theory, I don’t know how many people are actually utilizing it,” Tulane freshman Sydney Kuhn said. “I think that it is lucrative that we have the library open 24 hours during the weekday as students, and it shows the power of USG in changing things on campus.”

While some feel that the first floor is enough, other students feel as though the library should extend this 24-hour service beyond the first floor in order to accommodate the number of students enrolled at the university.

“I think what USG is doing is great, but it makes sense to me to have all of the floors open,” Tulane junior Nick Genna said. “The first floor doesn’t have much seating and a lot of what is there is better for group projects.”

If midterms were not enough for Tulane students, the community is also entering the peak of Mardi Gras season. Though carnival can be filled with fun and excitement, festivities have the potential to get out of hand. From Feb. 26-March 1, USG is hosting a variety of events for Know Your Rights Week, perfectly timed to ensure that students have a “healthy, happy and safe season.”

On Feb. 26, USG hosted a panel in City Diner with representatives from Tulane University Legal Assistance Program, Tulane University Police Department, Tulane Emergency Medical Services and the Office of Student Conduct. Other programming includes a barbecue with Campus Health where students can meet with health care providers of Feb. 28, and a “Coffee with a Cop” event on March 1.

USG is also working on an initiative to increase the number of water bottle refill stations in buildings across campus. This initiative is not only positive for the health of the Tulane community, it also is a good choice economically and environmentally.

According to the USG legislation, The University Planning Office has a goal of installing “refill stations in future construction projects on campus noting the absence of Water Bottle Refill Stations from the LEED Building Standard necessitates an additional measure or policy to regulate inclusion of stations.”

These changes are indicative of USG’s responsiveness to the desires of the undergraduate students.

“The resolution is a statement that students would like to see more water bottle refill stations on campus both in retrofitting and new construction while emphasizing the environmental and health benefits the stations provide,” USG Director of Sustainability John Alexander said.