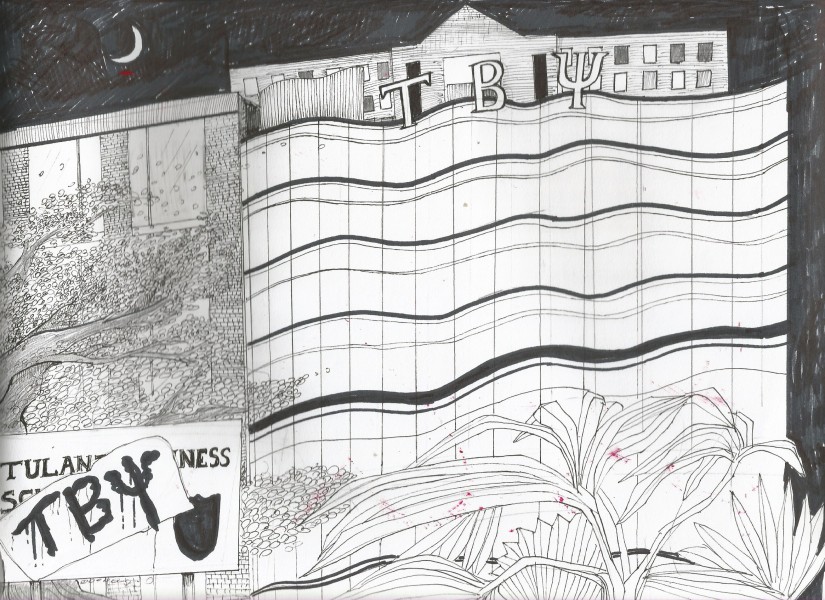 This article is for The Fullabaloo, The Hullabaloo’s satirical April Fool’s issue. The information and interviews below are completely fictional and for entertainment purposes only.

It was a typical Monday morning in the Goldring/Woldenberg Complex. Business School Dean Justin McElroy sat down with a steaming cup of his dark-blend no-sugar-added B-School PJ’s coffee. After beginning to sort through his inbox, which was practically bursting at the seams with yesterday’s drunken love letters from Every Single Finance Major, McElroy thought something seemed fishy.

However, nothing in particular was out of the ordinary: the lobby still looked like a better version of the New Orleans airport. The fake touch screen walls still flashed images of the most generic-looking human possible under the slogan “Be Different.” McElroy himself still continued to wrestle with the central question of his life, ‘Do airpods make me look more intelligent?’

Just then, he realized what was different. A reverberating hum of music from the “FUNJI Darty” playlist was pulsing through the building. Immediately, Dean McElroy rushed up the lavish spiral staircase, only to remember that B-School etiquette requires he ride the elevator. After backtracking to the elevators and riding to the roof, McElroy finally discovered the source of the noise: several fraternities had moved their fraternity houses to the roof of the B-school.

“What is going on?” Dean McElroy inquired, his face the same shade as every fraternity member: pale, very pale.

According to an anonymous source, Dean McElroy fainted at that moment.

Despite the initial confusion, the Tulane community slowly grew accustomed to the change over the next few weeks. Though mostly unoffended, many students were left wondering why.

“Why?” Sally Sallowitz, an undeclared liberal arts major, asked. “Why did they move their frat houses to the B-School?”

In response to Sally, several Kappa Apple boys procured a megaphone and screamed from the top of the B-School, “Yo, we were tired of walking. Chill.”

A week after the move, a sophomore engineering major from Montana discovered a lump of Vineyard Vines sweatshirts outside of the B-school.

“We figured President Fitts would do our laundry if we just left it there,” Zeta Pie brothers Brad and Chad said at the same time.

As the sweatshirts piled up, students began to notice Commander’s Palace catering trucks pull up along McAlister. Faculty attempted to reprimand the trucks for blocking everyone’s path to class only to discover that several parents of B-schoolers signed a contract with the restaurant stating that it would cater breakfast, lunch and dinner for all of the boys for the rest of the year.

Hearing this, several faculty members from the liberal arts shrugged, shook their heads and muttered, under their breaths, “Only the audacious.”

As the the year comes to a close, there is no telling what the B-school frat boys have in store.

“I’m thinking of working for my father’s company from the roof for the rest of the summer,” said Chad as he ordered 10,000 more red Solo cups from Amazon Prime.

With a quarter of Irby, Phelps, Sharp and Monroe now unoccupied, Housing and Residence Life is contemplating making the move permanent.

“This situation, as unconventional as it may seem, actually solves a lot of problems. Tulane can keep over-admitting while all of our B-School students stay happy,” says Tulane Housing and Residence Life intern.

In light of these events, rumors have been circulating that “No More Walking” will be the slogan for the next fundraising campaign.