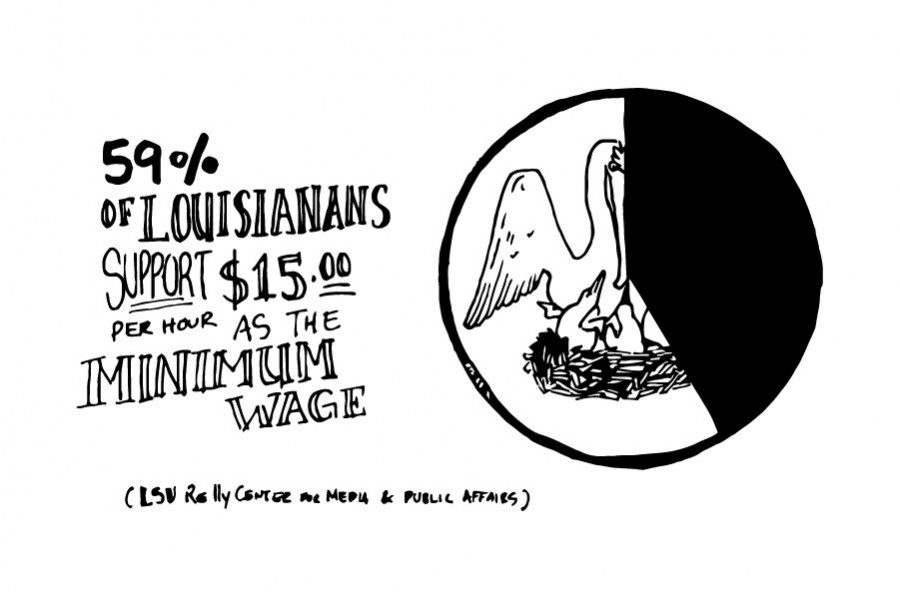 Louisiana’s 2019 legislative session began last Monday, April 8, with wage increases on the agenda. After years of inaction, the legislature should respond to the needs and desires of residents and vote to raise the minimum wage.

Currently, Louisiana has one of the lowest minimum wages in the country. With no state minimum wage law, the rate defaults to the federal minimum of $7.25 per hour. This figure has not increased since 2009 and has not kept up with inflation and the rising cost of living.

This is an area in which Louisiana is trailing behind the progress of other states. The majority of states set their minimum wage above the antiquated federal rate, and many have made additional increases in recent years. Eighteen states started 2019 with higher minimum wages than the year prior. With Louisiana continually ranking amongst the worst states for poverty, income inequality and food insecurity, this is a pressing issue that legislators must address. It is time for lawmakers to act on this issue before the state falls further behind.

Governor John Bel Edwards has continuously pushed for small increases in the state minimum wage. Despite the modesty of previous proposals, the prospect of wage increases saw no success in the legislature. This session, lawmakers are taking unique approaches to address this issue.

Democratic Senator Troy Carter of the 7th District introduced a bill that would set a state minimum wage of $9 per hour, via an Amendment of the state Constitution. This proposal would require two-thirds of the legislature’s vote and approval from voters to pass.

Another strategy, proposed by Democratic Representative Royce Duplessis, would give localities the ability to set their own wage policies. Currently, Louisiana state law prohibits cities and parishes from setting their own minimum wage. Duplessis’ proposal would repeal this ineffectual law and give localities not only the ability to set a minimum wage, but to change their leave laws. This bill has garnered support from the New Orleans City Council, which passed a resolution last Thursday encouraging the state legislature to pass the bill. It is also supported by Unleash Local, a coalition of nonprofit organizations in the city. This bill would only require a simple majority vote to pass.

Public opinion overwhelmingly supports raising the minimum wage. A recent survey from LSU’s Reilly Center for Media & Public Affairs found that 81% of Louisiana residents support a $8.50 per hour minimum wage. When asked about support for a $15 per hour minimum wage, the majority of subjects still pledged their support for the policy, with 59 percent in favor. Clearly, the continuous failure of the legislature to pass a modest increase in the minimum wage is not reflective of the actual policy preferences of Louisiana residents.

This legislative action is long overdue. Louisiana residents deserve the dignity of a higher minimum wage, which would give more individuals and families the ability to pull themselves out of poverty. Legislators should respond to the needs and desires of their constituents and raise the minimum wage.