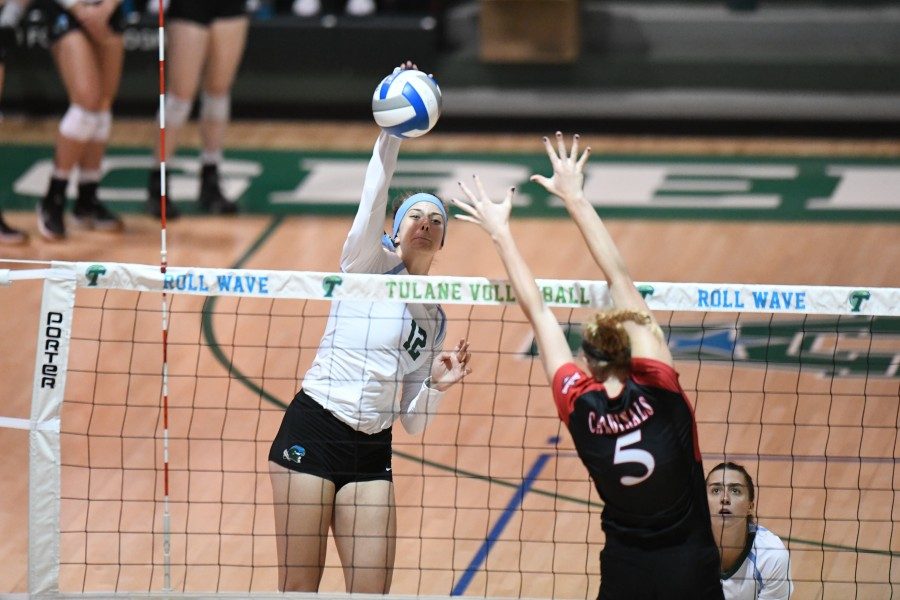 Recent graduate Dayna Kern spikes the ball against the University of the Incarnate Word.

These new faces spark additional hope that the team will be able to build on last season’s strong performance. The Green Wave has already been named a “High Honorable Mention,” with its recruiting class ranked just outside the top 50 in the nation.

“We’ve moved closer to our program goals of perennial AAC championships and NCAA Tournament appearances, and together, this crew will be a big part of making this happen,” Brian Yale, associate head coach and recruiting coordinator, said in a press release. 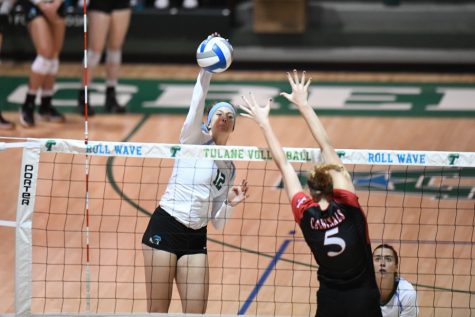 The season kicked off with an exhibition match against Stephen F. Austin University on Aug. 24 in Nacogdoches, Texas. The team was in fine form, with senior Erika Hansel leading Tulane to victory with 32 kills. Sophomore Makala Heidelberg dominated as well, providing a blistering 13 kills and 12 digs.

This success comes as no surprise given the team’s stellar performance in the National Volleyball Invitational Championships last year. The Green Wave claimed four series victories against Arkansas State, California Baptist University, Valparaiso and the College of Charleston before falling to Iowa State.

Though last year’s graduating seniors, middle hitter Hannah Slaw, libero Lisa Mordell and middle hitter Dayna Kern, will surely be missed, the team is already off to a promising start and on track for another stellar season.

The team will next travel to Lafayette, Louisiana, on Aug. 30 to officially start the season in the DoubleTree Classic against The University of Texas at El Paso.